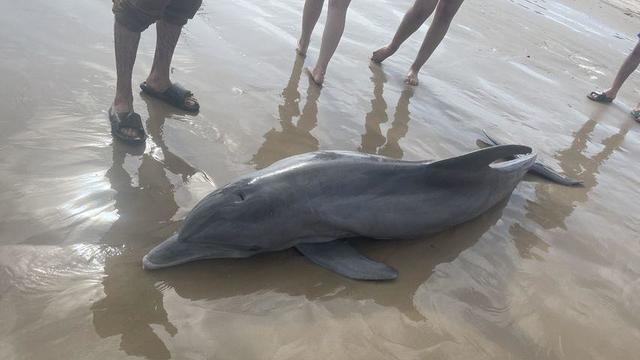 An ailing dolphin stranded on a Texas beach died after a crowd of people harassed the mammal and tried to "ride" it, rescue officials said.
On Sunday, beachgoers found the sick dolphin on Quintana Beach, pushed it back out to sea and tried "to swim with and ride the animal," the Texas Marine Mammal Stranding Network said in a Facebook post.
The dolphin in these photos stranded alive on Quintana Beach, TX on Sunday evening and was reportedly pushed back to sea...
The female dolphin was ultimately stranded again on the beach where she was harassed by a crowd of people, the network said in the post, along with two images of the stranded dolphin.
"This type of harassment causes undue stress to wild dolphins, is dangerous for the people who interact with them and is illegal — punishable by fines and jail time if convicted," the group said.
Last year, NOAA Fisheries said it had observed "continued incidents of inappropriate and illegal interactions" with another dolphin near North Padre Island.
In a separate incident this week in Florida, NOAA's Office of Law Enforcement asked the public for information about a bottlenose dolphin found dead on Fort Myers Beach. A necropsy revealed the dolphin was impaled in the head with a spear-like object while alive.
"Based on the shape, size and characteristics of the wound, it is suspected that the dolphin was impaled while  in a begging position," NOAA said in a statement. "Begging is not a natural behavior for dolphins and is frequently associated with illegal feeding."
Since 2002, at least 27 dolphins have stranded with evidence of being shot by guns or arrows, or impaled with sharp objects, the agency said.
Harassing, harming, killing or feeding wild dolphins is prohibited under the Marine Mammal Protection Act. NOAA says violations can be prosecuted civilly or criminally and are punishable by up to $100,000 in fines and up to one year in jail per violation.
The agency encourages people to observe marine mammals from a distance of at least 50 yards.
Stephen Smith is a senior editor for CBSNews.com
source: https://www.cbsnews.com/news/stranded-dolphin-dies-texas-beachgoers-try-to-ride-it-rescuers-say/