Almost two-thirds of Ukraine's 7.5 million children have been displaced 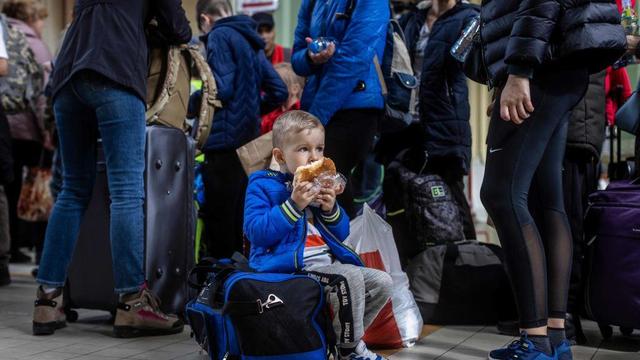 United Nations — Almost two-thirds of Ukraine's 7.5 million children had been displaced just six weeks into the invasion by Russian forces, according to UNICEF, the United Nations' children agency. UNICEF Emergency Programs Director Manuel Fontaine said these children have been "forced to leave everything behind: Their homes, their schools, and often, their family members."
According to Fontaine, 2.8 million children are internally displaced, while 2 million have fled Ukraine as refugees.
In addition to the millions that have been displaced, half of the estimated 3.2 million children who remain in Ukraine are at risk for not having enough food, Fontaine, who just returned from the war-torn country, told diplomats on Monday.
"Attacks on water system infrastructure and power outages have left an estimated 1.4 million people without access to water in Ukraine. Another 4.6 million people have only limited access," Fontaine said at a U.N. Security Council meeting focused on women and children in Ukraine.
"I have rarely seen so much damage caused in so little time," Fontaine, who has worked as a humanitarian for 31 years, said. "Friday's attack on Kramatorsk train station was particularly horrifying," Fontaine added, referencing a rocket strike that, according to Ukrainian officials, killed at least 52 people at a train station being used to evacuate civilians.
UNICEF's envoy said that, as of Sunday, the U.N. had confirmed that at least 142 children have been killed and 229 injured in the fighting. "We know these numbers are likely much higher — and many of them were caused by crossfire or the use of explosive weapons in populated areas," he added.
Fontaine said that UNICEF is delivering aid daily and has ordered $80 million worth of supplies focused on health and hygiene. He said the organization was delivering trauma kits only a short distance from the train station in the eastern city of Kramatorsk when it was attacked.
"I am particularly concerned about the widespread presence of explosive remnants of war, which expose children to the risk of death and horrendous injury," Fontaine added.
Ukraine's U.N. Ambassador Sergiy Kyslytsya on Monday claimed that Russia has "already taken more than 121,000 children out of Ukraine." Kyslytsya went on to say that "Russia is reported to have drafted a bill to simplify and accelerate the procedure for the adoption of abducted Ukrainian children, both orphans and those who have parents and other relatives."
Lesia Vasylenko, a member of Ukraine's parliament, has also made claims of mass child abductions by Russian forces, but these alleged abductions have been extremely hard to track in the middle of a war.
Fontaine told CBS News that UNICEF does not currently have access to areas of Ukraine or Russia that would allow them to investigate reports of child abductions, but said "we are looking into how we can track or help on that."
UNICEF spokesperson Joe English told CBS News that the agency hasn't been able to "independently verify these reports. They are, of course, incredibly concerning."
"The abduction of children during times of war is one of the six grave violations against children in conflict and is prohibited under international humanitarian law," he said.
U.S. Ambassador to the U.N. Linda Thomas-Greenfield told diplomats that  "90% of refugees from Ukraine are women and children."
"Women in Ukraine are at increased risk for gender-based violence, including rape, sexual assault, and sexual exploitation," Thomas-Greenfield said.
Kyslytsa said that "the Prosecutor General's Office of Ukraine, in cooperation with pretrial investigation agencies and health care facilities, is now launching a special mechanism of documentation of cases of sexual violence by Russian soldiers against Ukrainian women."
"The Kremlin must be stopped, for the sake of future generations," Ukraine's Ambassador said.
Pamela Falk is the CBS News correspondent covering the United Nations, and an international lawyer.
source: https://www.cbsnews.com/news/ukraine-refugees-millions-of-children-displaced-un-says/