More than 92 pounds of fentanyl seized in California 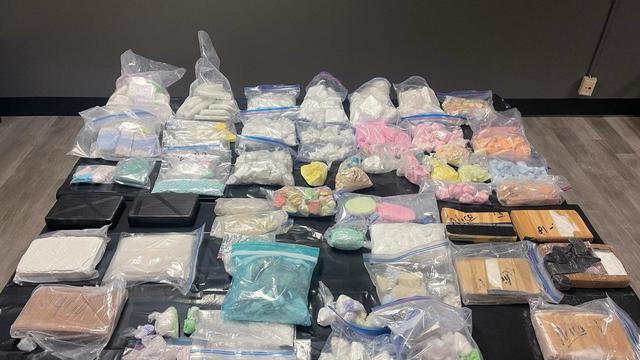 California detectives seized around 92.5 pounds of illicit fentanyl in a massive drug bust, the Alameda County Sheriff's Department announced Saturday. Officials showed images of the synthetic opioids seized in the operation on social media.
According to spokesman Sergeant Ray Kelly, raids on Friday revealed a major fentanyl manufacturing lab, CBS San Francisco reports. One suspect has been arrested in connection with the operation while a second is at large, according to CBS San Francisco.
Police said the drugs were recovered in Oakland and Hayward, California and were "headed for the streets of the Bay Area."
The amount of fentanyl seized is equivalent to 42,000 grams, authorities said. According to the Drug Enforcement Administration, one kilogram of fentanyl has the potential to kill 500,000 people. The synthetic opioid is up to 100 times more potent than morphine and is considered by the Centers for Disease Control and Prevention as the primary driver of overdose deaths in the United States.
"This is a glimpse of the fentanyl epidemic," the Alameda County Sheriff's Department said on Twitter Saturday.
Tori B. Powell is a breaking news reporter at CBS News. Reach her at [email protected]
source: https://www.cbsnews.com/news/fentanyl-seized-92-pounds-california/