The organiser of a protest outside the former Marsden Point oil refinery insists anti-vax campaigners have left.

That's despite the fact he spent weeks at the occupation at Parliament earlier this year. 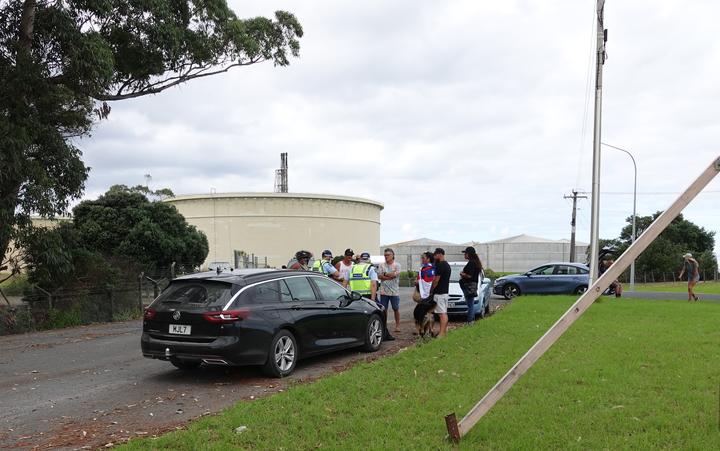 Earlier this week the demonstrators had mixed messages opposing vaccine mandates and the refinery's closure.

The group has since scaled back to 15 vehicles and handful of tents, from about 40 vehicles and 90 people on Monday.

The group has moved a verge on the western side of State Highway 15 to the eastern side.

Organiser Brad Flutey said vaccine-related signs had been taken down, and the group was solely focused on fuel security.

"We're sympathetic to that cause but we are here for the refinery today. We put some refinery-related corflute signs over the top of that."

He said Channel Infrastructure, that owns the former refinery, will not talk to him.

"It seems the stance of politicians and corporations - which have very little difference between the two [sic] - is no negotiation and they seem to look at anyone that opposes them in the same light."

Mana whenua of Marsden Point, or Poupouwhenua, met with protesters this week and asked them to leave after "blatant disrespect" by those occupying the land.

Patuharakeke Te Iwi Trust chair Deborah Harding said Flutey clearly stated he was not seeking permission from mana i te whenua and would occupy regardless.

"Our kaumātua shared their disappointment about the email received and the blatant disrespect the protesters demonstrated to Patuharakeke," she said.

RNZ has viewed the email from Flutey sent to the hapū.

It reads: "We know we should ask for permission, but the truth is, we are coming whether we are welcomed or not. All we can truthfully ask for, is forgiveness after our arrival and acknowledge that those with wisdom can overcome offence."

Harding said the hapū, represented by Patuharakeke Te Iwi Trust and Te Poari O Ngātiwai, held a hui with protesters on Monday to hear their concerns and better understand why they were there.

"But to be clear there wasn't really any one strong objective, it wasn't a strong collaborative focus.

"It was really hard to get a strong focus point of what exactly it was they're trying to advocate for. That, in a sense, questioned exactly what are they doing here, cause you can advocate for that anywhere. "

Harding said the closure of the oil refinery had caused mixed feelings in the hapū due to the economic impact and job losses.

However, Harding said the refinery had polluted the landscape which sat on confiscated land entwined in a Waitangi Tribunal claim.

"When Brad Flutey refers to the refinery and taking it over, then we have an absolute interest because we are working on repatriation on that area. Not only for ourselves but for other hapū that have strong links to Poupouwhenua.

"They aren't the haukāinga, they aren't from there. We already hold that space, we invited them to have their say and then we asked kindly for them to leave."

In a statement, Channel Infrastructure said: "The refinery has now been permanently shut down and refined fuel imports are now flowing through the terminal."

It said "permanent decommissioning" was under way, including "cleaning, depressurising and some demolition".