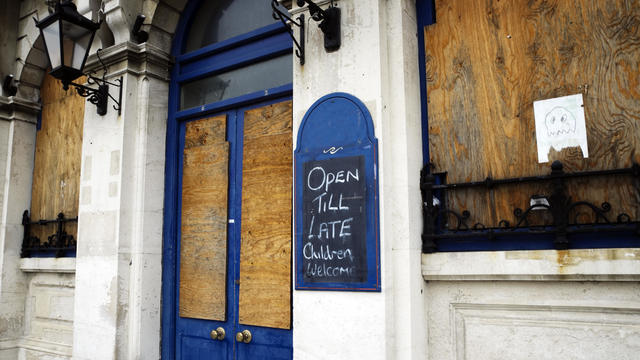 More than two years after the COVID-19 pandemic forced restaurants across the nation to shutter, and after they've reopened with restrictions in place, independent establishments are still struggling to make ends meet.
While their establishments may appear busy at times — with packed outdoor patios — the fallout from the initial phases of the pandemic continues to threaten independent bar and restaurant owners' chances of survival, according to a new report from an independent restaurant group.
Federal aid programs providing relief in the form of grants and loans have proved insufficient in keeping many establishments afloat in an industry that was already known for its tight profit margins.
The $28.6 billion Restaurant Revitalization Fund (RRF), a grant program that was part of the American Rescue Plan, has buoyed those applicants that managed to receive funding.
But only about one in three applicants to the programs got money. For those who weren't awarded grants, the outlook is bleak, according to the Independent Restaurant Coalition (IRC), a grassroots organization formed by chefs and independent restaurant owners to secure protections for the industry.
"The data tells us what we've been hearing from restaurants for more than two years: thousands of businesses will close if the Senate does not replenish the Restaurant Revitalization Fund," Erika Polmar, executive director of the IRC said in a statement Thursday. "After two years of missed rent, supplier and utility payments, navigating astronomical food costs and multiple COVID-19 surges that brought businesses to a halt, independent restaurants and bars are out of time, options and money," Polmar said.
New survey data bears this out. More than half — 52% — of the independent restaurants and bars that did not receive RRF grants anticipate they will have to close within six months, according to a survey from the IRC. That compares with 24% of businesses that did secure funds but still say they might not make it another year.
In particular, owners who didn't receive grants say they're in greater danger of defaulting on loans, having to file for bankruptcy or being evicted by their landlords.
The IRC and restaurateurs across the country are hoping the Relief for Restaurants and Other Hard Hit Small Businesses Act, passed in the House of Representatives last week, will also pass the Senate, and allocate an additional $42 billion to the RRF.
A separate piece of legislation, the Small Business COVID Relief Act of 2022, has been introduced in the Senate and would add $40 billion to the RRF.
Cheetie Kumar, owner of Garland, a Raleigh, North Carolina, restaurant and music venue, considers herself lucky to have received an RRF grant. Grant amounts are determined by calculating the difference between a business's revenue in 2020 and its revenue in 2019, minus the value of any Paycheck Protection Program loans it received.
Kumar said she has not had a solid quarter since the beginning of the pandemic, and that without the funds, her restaurant would not currently exist.
"No three consecutive months have had revenue match what it used to be. We'll have two great months or 6 great weeks, but that's it," she told CBS MoneyWatch.
"When [COVID] cases rise, we see hesitance on the part of diners, which comes through in the number of reservations we get. When there is a surge, people don't want to come eat in restaurants. And our menu and kitchen are not designed for takeout," she said.
Kumar has to make the money last, too, given the rise of the BA.2 variant of the coronavirus and the uncertainty that lies ahead.
"We will have to sustain the money for at least another year, if not longer. If we didn't have that money we would be so far underwater it would be impossible to open and we would walk away from this with massive personal debt," she said.
While Kumar is not eligible for a second RRF fund, she is advocating for the RRF to be replenished to save her industry. She said she knows all too well how tough it is to run a profitable restaurant, and doesn't think it's fair that some of her neighbors were left high and dry.
"I am not asking this for my own business; we will find a way to survive because we got the grant. But this is a fight for us —it's for our industry to survive," she said. "If I am the only person in our downtown community who survives this, that's not much of a community."
source: https://www.cbsnews.com/news/independent-restaurants-restaurant-revitalization-fund-closing/