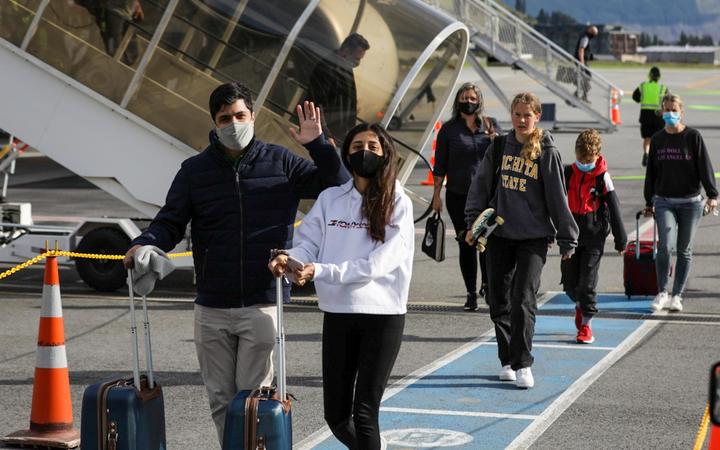 Australians are now allowed into the country without isolating under the border change which took effect at midnight. It is first time they have been allowed in isolation-free since the trans-Tasman bubble last year.

It has been a grim two years for the resort town, but the mood has been shifting since the border reopening was announced.

It has diversified its workshop that would usually service its buses and jet boats.

"We had mechanics sitting around that needed work so we set that up as a commercial garage to be able to service the general public's cars and trucks and jet boats.

"Just to have more numbers come through and more money coming is just going to be massive."

The business - like many others in Queenstown - was facing a staffing dilemma.

"Are there going to be enough staff in order for us to be able to operate at the capacity that we want to?

"Skippers dropped from about 15 staff on the books to having about five on the books so it's kind of the minimum that we have at the moment in order to be able to operate.

"But luckily, with that number we're still able to deal with a reasonable number of customers over winter. But we're definitely going to be needing some more boat drivers and bus drivers when numbers do start picking up."

While Australians could start returning from Wednesday, the first direct flight to touch down in Queenstown wasn't expected until late May with Air New Zealand scheduled to pick up the trans Tasman route in June.

He didn't expect bookings to pick up much before winter.

"We're not expecting an immediate rusk of customers just because the ... borders have opened today so it's going to build slowly.

"But it obviously gives us that extra optimism that we've got another market open to us for the winter."

Sarah Russell from Appellation Wine Tours said they were ready to go after managing to hold on to their staff.

"I just kind of get the feeling that a lot of Australians might be waiting and hanging out for the ski season as opposed to coming immediately."

"We're likely to see them full, but also with the addition of a number of private tours running every day so it will be huge."

She was pleased some of the Australians who had to cancel previous trips were booking again.

He expected that would continue to pick up

"I think before the ski season for sure because people are preparing now."

Some dates in July were already sold out with good bookings coming through for June, Sajjan said.

He has been advertising for more staff so they were ready for more visitors, but said they were very hard to find locally.

"But at the moment, we are very short staffed."

With Queenstown ski fields expected to open in June, businesses were confident they wouldn't have to wait too long to see more Australians in town.