Zelenskyy calls on U.S. and its allies to deliver more weapons immediately 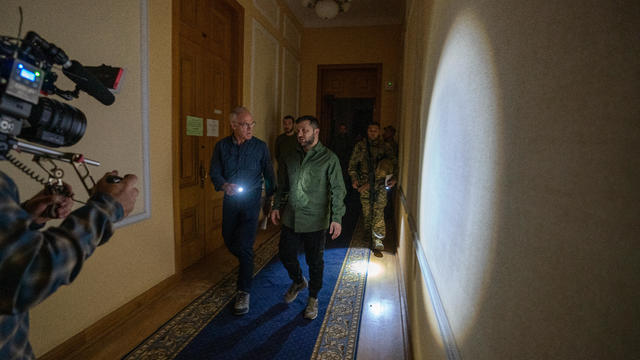 Ukrainian President Volodymyr Zelenskyy said he can't understand Russia's brutality during its invasion of Ukraine, and called for more aid immediately from the United States and its allies in order to withstand Russian attacks.
"We don't understand [the Russians]," Zelenskyy said in an interview with 60 Minutes correspondent Scott Pelley, two days after visiting Bucha, where civilian bodies lay in the streets after Russian forces withdrew from areas around Kyiv. "You can't really understand this world, that there are people on this planet who give these orders and people [who carry them out]."
"Death. Just death," Zelenskyy said of what he saw in Bucha, adding that bodies had been "left out like trash."
Despite Zelenskyy's repeated pleas for a no-fly zone, the U.S. and its allies have declined, saying it could lead to a direct military confrontation between two nuclear-armed powers – the U.S. and Russia.
"I remember, all of us remember, books about the second World War and about the devil in uniform – Adolf Hitler," Zelenskyy said. "Are those countries who did not participate in the war responsible? The countries who let German forces march throughout Europe? Does the world carry responsibility for the genocide? Yes. Yes, it does. When you [have the ability to] close the sky – yes it's scary, that a world war could start. It's scary. I understand [that]. And I cannot put pressure on these people because everyone is afraid of war. But whether the world [is responsible] for this, I believe so, yes. I believe so.
"Stand in front of the mirror every day and ask yourself, were you able to do something? Or were you unable to do something? You will find the answer in the mirror to this question, and to another question – who are you? That's what I believe."
Zelenskyy warned that not doing more for Ukraine now means Russia could "move closer and closer to Europe."
"They will only become stronger and less predictable," he said.
Zelenskyy said Ukraine needs more sanctions imposed on Russia, and more military aid from allies, who should be less fearful of Putin.
"Weapons, number one. They need to be very serious about it. They definitely understand what I'm talking about right now. They have to supply weapons to Ukraine as if they were defending themselves and their own people. They need to understand this: If they don't speed up, it will be very hard for us to hold on against this pressure. The second factor is sanctions. Because we've found some things in sanctions that are easy for financial experts to circumvent. Russia has been circumventing them, and this is absolutely true. The Western world knows it. This shouldn't be allowed. This is not a movie, this is real life. Stop fearing the Russian Federation. We've shown we are not afraid."
Zelenskyy's chief of staff, Andriy Yermak, told Pelley that he asked the Biden administration for heavier weapons – tanks and jets – and for them to be delivered fast.
"If we receive this support in time, we will win," Yermak said.
A White House official told 60 Minutes that Yermak received a "yes" to his requests, but filling those orders takes time. The Ukrainians also need Russian-made weapons that they already know how to use.
Meanwhile, Russia is escalating its attacks in the East and South.
"We think this will be a new wave of this war. We don't know how much [Russian weaponry] there will be. But we understand that there will be many times more than there is now," Zelenskyy said. "[All] depends on [how fast] we will be helped by the United States. To be honest, whether we will be able to [survive] depends on this. I have 100% confidence in our people and in our armed forces. But unfortunately, I don't have the confidence that we will be receiving everything we need."
Zelenskyy said Ukraine's Security Service has intercepted communications of Russian soldiers talking with their parents about "what they stole and who they abducted" as it collects evidence of alleged war crimes. It has recordings of Russian prisoners of war "who admitted to killing people" and had "maps with civilian targets to bomb."
"There are also investigations being done based on the remains of the dead," he said.
When asked if Russian President Vladimir Putin should be prosecuted for war crimes, Zelenskyy said "everyone who made a decision, who issued an order, who fulfilled an order, everyone who is relevant to this, I believe they are all guilty." He added that he does believe Putin is "one" of the people responsible.
Few expected Ukraine to hold off Russia for as long as it has. Zelenskyy is not ready to say what victory looks like yet, but he cited the courage of his people as the reason he believes his country will win the war.
"We united as a nation. Even though [our people] understood that they would be outnumbered tenfold, and  there would be no way out. Just no way out. We fought for our existence and for survival. That's the combined heroism of everyone – of the people, of the authorities, of the armed forces. We became a single fist."
Caitlin Yilek is a digital producer for CBS News. Reach her at [email protected] Follow her on Twitter: https://twitter.com/hausofcait
source: https://www.cbsnews.com/news/volodymyr-zelenskyy-ukraine-russia-military-aid-60-minutes-2022-04-10/