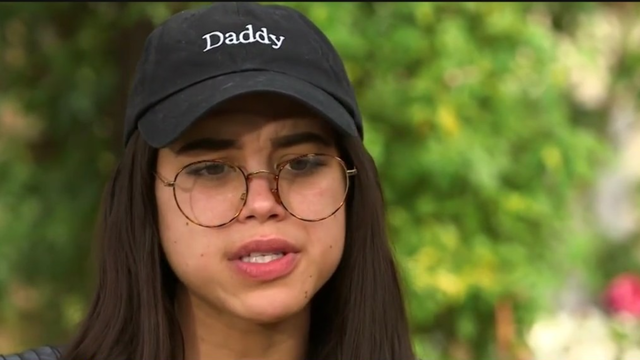 A woman who was caught on camera attacking a Black teenager in a New York City hotel lobby after accusing him of stealing her cellphone agreed to a plea deal on Monday. Miya Ponsetto, 23, of California, pleaded guilty to unlawful imprisonment in the second degree as a hate crime, according to the Manhattan District Attorney.
Ponsetto, also known as "SoHo Karen," was thrust into the national spotlight after footage of the incident went viral on social media in December 2020. She attacked 14-year old Keyon Harrold, Jr. and his father in the lobby of the Arlo Hotel in SoHo, accusing the teen of stealing her iPhone. Her lawyer later confirmed she actually left the phone in an Uber.
"Ms. Ponsetto displayed outrageous behavior," District Attorney Alvin L. Bragg, Jr. said in a statement Monday. "As a Black man, I have personally experienced racial profiling countless times in my life and I sympathize with the young man victimized in this incident. This plea ensures appropriate accountability for Ms. Ponsetto by addressing underlying causes for her behavior and ensuring this conduct does not reoccur."
Ponsetto's lawyer, Paul D'Emilia, said that she is pleased her plea deal can bring the "unfortunate misunderstanding" to a close.
"Ms. Ponsetto looks forward to her eventual final plea to the Harassment charge - a plea that we feel more realistically reflects her actions that night at the Arlo Hotel," D'Emilia said. "It is Ms. Ponsetto's wish that Keyon Harrold accepts her regrets and apology for her behavior that evening, and that all involved can move forward with added insight and compassion."
In an exclusive interview on "CBS Mornings," which took place hours before her initial arrest in January 2021, Ponsetto denied that her actions were racially motivated.
"I'm sincerely sorry to the family and the dad and the son for making them feel as if I was racist," Ponsetto told co-host Gayle King, before becoming extremely combative.
"The footage shows me attacking his son, attacking him how? Yelling at him, OK, I apologize. Can we move on? Basically I'm a 22-year-old girl. I am, I don't — racism — how is one girl accusing a guy about a phone a crime?"
Under the conditions for her plea deal, Ponsetto will be required to continue counseling, avoid interaction with the criminal justice system and follow the terms of her probation from a separate California case. If she maintains those conditions for two years, she will be allowed to re-plead to aggravated harassment in the second degree, a class A misdemeanor. If she fails to abide by the terms, Ponsetto could spend 1 1/3 to 4 years in state prison.
source: https://www.cbsnews.com/news/miya-ponsetto-plea-deal-unlawful-imprisonment-hate-crime-attack-black-teen-new-york-city-hotel/