Crude oil prices are down. Why aren't drivers seeing relief? 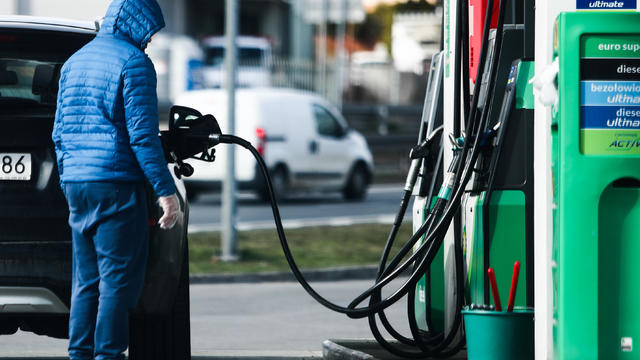 The price of crude oil has dropped significantly compared to a month ago, but drivers in the U.S. are still experiencing sticker shock at the gas pump.
Crude oil is down more than $20 a barrel, or a decline of almost 20%, from its March peak. But gas prices remain elevated, costing an average of $4.11 a gallon at stations across the U.S., according to GasBuddy, a service that tracks fuel prices. That means prices at the pump have dipped about 5% during the same time.
So why aren't savings on crude oil translating to price relief for drivers?
"It does seem weird, but it's something that economists do expect and have studied for a long time," said Ben Storrow, a reporter for E&E News, a news outlet that covers energy.
When the price of crude oil rises, gas stations typically wait to hike their prices so as not to scare away customers.
"But then once they do start to raise prices, they raise them very quickly," Storrow explained to CBS News.
On the flip side, when the price of crude oil drops, gas stations lower prices gradually. That allows them to make a profit on the discrepancy between what they're paying and what they charge motorists, he added.
"When the price of crude starts to drop, they will lower the prices at the pump more slowly. That's actually where gas stations make most of their money," Storrow said.
An imbalance in the market has driven up the cost of gasoline during the past year. Demand, sparked by the economic recovery following COVID-19 shutdowns, has outstripped supply, which takes longer to replenish.
"Demand has been growing faster than supply. It takes time to get drilling rigs out in the field, it takes time to get the oil flowing," Storrow said.
There could be some relief on the horizon.
The shutdown in Shanghai due to a COVID-19 outbreak has cut China's demand for oil by more than a million barrels a day, according to Bloomberg News. Rising cases in Beijing are stoking fears of shutdowns in China's capital, which could drive down demand for oil even more.
"That might be relieving some of the tightness in the market right now," Storrow said.
It may not translate to immediate relief for American motorists, though.
"Predicting oil prices is a tricky business. I don't know how quickly that would work its way through the system and consumers would see that at the pump," Storrow added.
Prices are expected to average somewhere around $3.80 this year, according to the U.S. Energy Information Administration.
source: https://www.cbsnews.com/news/gas-prices-crude-oil-why-are-gas-prices-so-high-2022/