Dramatic video shows jet skid off runaway and split in half 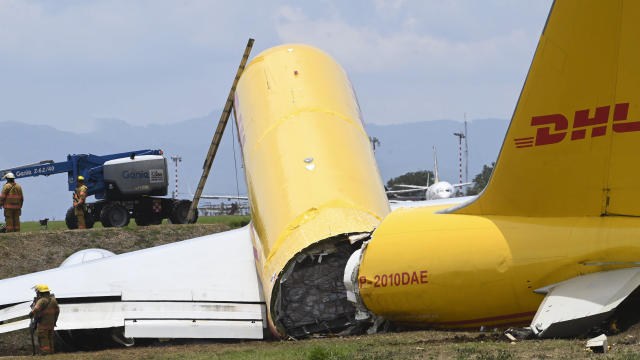 A DHL cargo jet slid off the runway and broke in half while landing at San Jose's international airport in Costa Rica Thursday, shutting down the airport, but not injuring crew. Dramatic video of the incident showed the plan spin off the runway and break into two, sparking a dark plume of smoke.
A DHL plane slid out of control and crashed on the runway of Juan Santa Maria Airport in Costa Rica on Thursday. pic.twitter.com/2DTl8pUaST
The fire department said the Boeing 757 had taken off from Juan Santamaría Airport just west of the capital, but decided to return after detecting a failure in the hydraulic system.
Héctor Chaves, director the Costa Rica Fire Department, said that upon landing the aircraft skidded, turned and broke in two, exposing its cargo.
"Units mobilized to remove the pilot and co-pilot," Chaves said. "Then they applied foam to prevent a spill and now they are working on an earthen dike to avoid any fuel from reaching the drainage system."
A spokesman for cargo carrier DHL said both pilots were not injured.
But AFP reported the Guatemalan pair were sent to hospital as a precaution "for a medical check-up," according to Guido Vasquez, a Red Cross worker.
The pilot was shaken up but both crew were conscious and "remember everything vividly," added Vasquez.
DHL spokesman Daniel McGrath said the company was working with airport authorities to move the plane so flights could resume. He said an investigation would be conducted to determine the cause of the incident.
DHL is a subsidiary of Deutsche Post DHL Group.
Luis Miranda, deputy director of civil aviation for Costa Rica, said the plane had gone only about 35 miles from the airport when it requested permission to turn back from its planned flight to Guatemala City. He said the pilot and co-pilot were the only crew members aboard the plane, which was carrying only about 2½ hours worth of fuel.
The accident caused operations to shut down at the country's biggest airport until around 5:30 pm, impacting hundreds of flights and over 8,000 passengers, AFP reported.
Activities have now gone back to normal, "as well for the arrivals as for the departures", said Ricardo Hernandez, general manager of Aeris, the public company which manages the airport.
source: https://www.cbsnews.com/news/dhl-plane-crash-runaway-costa-rica-video/