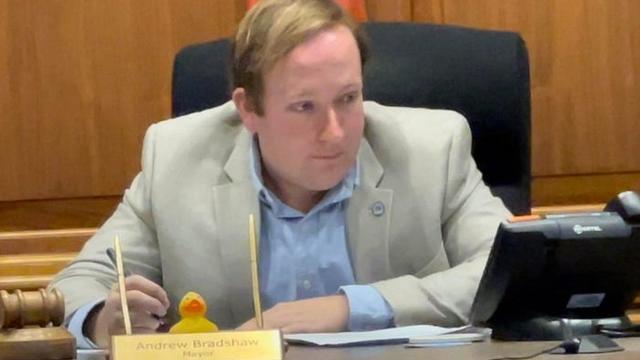 A former Maryland mayor who admitted to posting nude photos of his ex-girlfriend on Reddit will not have to spend time behind bars under a plea deal announced by the state prosecutor's office on Monday.
Former Cambridge Mayor Andrew Bradshaw pleaded guilty to five counts of distributing revenge porn online and was sentenced to a year and a day for each of the five counts, with all of the incarceration time suspended. He also was sentenced to three years of supervised probation and fined $1,000 for each count.
Bradshaw also was ordered to pay $750 in restitution to the victim and perform 100 hours of community service.
The former mayor had faced a maximum penalty of two years' incarceration and a $5,000 fine for each count.
Bradshaw had pleaded guilty to posting nude photos of a woman he was once in a relationship with after the relationship had ended.
The woman contacted authorities in May after learning that the photos were posted on Reddit. She told authorities that she had sent the photos only to Bradshaw while they were in an intimate relationship, and she didn't give him permission to redistribute them.
Investigators discovered that Bradshaw had made numerous separate public posts that contained at least 10 unique visual representations of the victim, and that numerous posts contained language that was related to humiliation and degradation, the state prosecutor's office said.
When interviewed, Bradshaw admitted to law enforcement agents that he created the accounts and posted the victim's nude photographs, authorities said. Bradshaw resigned his position as mayor in January.
"Anyone who abuses the trust and confidence of another to degrade and humiliate them, particularly through the use of a forum as powerful and pervasive as the Internet, must be held accountable," said State Prosecutor Charlton T. Howard, III. "Such actions are especially egregious when committed by an individual holding a public leadership role of power and authority."
Maryland law prohibits the nonconsensual distribution of a private visual representation of another which exposes their intimate body parts or displays them engaged in sexual activity, with the intent to harm, harass, intimidate, threaten or coerce the person depicted.
source: https://www.cbsnews.com/news/andrew-bradshaw-former-cambridge-maryland-mayor-avoids-prison-in-revenge-porn-case/