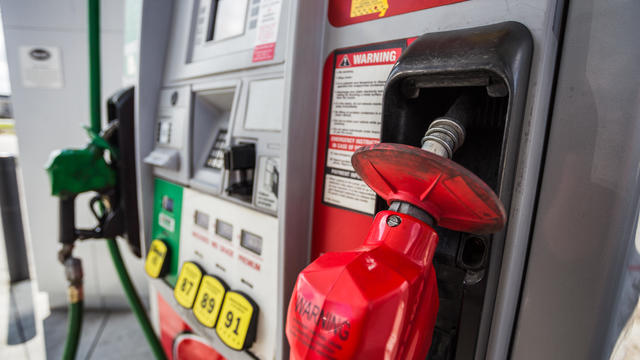 The Biden administration is planning to allow a gasoline blend that includes 15% ethanol to continue to be sold into summer, senior administration officials announced Tuesday.
The 15% mix, known as E15 gasoline, is usually banned for sale from June 1 to September 15, peak travel months, because it is more volatile in the heat and there is some concern that it contributes to smog, though renewable fuel advocates claim this is untrue. Under current law, gas stations may sell a 10% ethanol blend year round. The Environmental Protection Agency intends to issue a national emergency waiver to change that for most of the country from June 1 to September 15.
A senior administration official said E15 gas can be 10 cents cheaper per gallon than conventional gas, but it's unclear exactly how much the change will affect drivers' pocketbooks.
The E15 announcement is the latest action the Biden administration is taking to reduce prices at the pump, which were already high, even before Russian President Vladimir Putin launched his war on Ukraine, and prices have been ballooning. The administration is also releasing about 1 million barrels a day from U.S. reserves. According to AAA, the current price for gas nationally is $4.11.
The White House says the EPA will work with states cross the country to ensure there aren't serious effects on air quality. But the administration is considering allowing the use of E15 gas year-round. At the moment, only about 2,300 gas stations across the country offer E15 gas, according to the White House.
The EPA plans to take final action on issuing the emergency waiver as the calendar nears June 1.
It's not known yet how environmental activists will respond, and the exact environmental impact of the change is also unclear.
Kathryn Watson is a politics reporter for CBS News Digital based in Washington, D.C.
source: https://www.cbsnews.com/news/gas-prices-e15-ethanol-gasoline-blend-biden-administration-epa/