Why some Ukrainians are bristling over Pope Francis' Good Friday plans 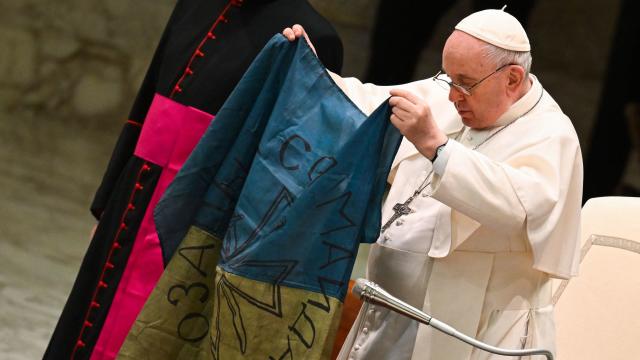 Rome — Pope Francis' decision to have both Ukrainian and Russian families carry a cross together during an annual Good Friday celebration this week has drawn a backlash. The suggestive, candle-lit "Way of the Cross" procession, which takes place in Rome's ancient Coliseum, commemorates Jesus Christ's last day on Earth.
Readings and prayers take place along 14 stations, representing specific events of that last day. Groups or individuals are chosen to carry the cross from one station to another.
This year, Pope Francis decided to include a meditation written jointly by two families, one Ukrainian and one Russian. At the 13th station, which represents Jesus' death on the cross, the two families will read the reflection on how the war has affected them, then women from each family will carry a wooden cross before passing it to a family of migrants at the next station. Both families live in Rome and the women are colleagues and friends.
Protests against the format — which critics say puts the suffering of the Russian and Ukrainian families on a par — have been raised from those inside the Catholic church in Ukraine.
Major Archbishop Sviatoslav Shevchuk, the head of the Ukrainian Greek Catholic Church, which comprises some 5 million worshippers, said in a video statement that he considered the idea "untimely, ambiguous, and such that it does not take into account the context of Russia's military aggression against Ukraine."
He said the texts and gestures of the 13th station in the procession were "incoherent and even offensive, especially in the context of the expected second, even bloodier attack of Russian troops on our cities and villages."
The Vatican's Ambassador to Ukraine, Archbishop Visvaldas Kulbokas, also objected. He told a Catholic magazine that "reconciliation must come when aggression is stopped, when Ukrainians will be able to not only save their lives, but also their freedom. And, of course, we know that reconciliation occurs when the aggressor admits their guilt and apologizes."
Andrei Yurash, Ukraine's Ambassador to the Holy See, said on Twitter that his embassy "understands and shares the general concern in Ukraine and many other communities about the idea to bring together Ukrainian and Russian women" during the Way of the Cross. "Now we are working on the issue trying to explain difficulties of its realization and possible consequences."
Father Antonio Spadaro, a close advisor to Francis, defended the pope's choice, saying on Italian TV that the head of the Catholic Church is a pastor, not a politician.
"I understand that in this specific situation this is a very painful gesture that could be misunderstood," he said. "In a moment such as this one, a very difficult moment… the message that Pope Francis can give is a prophetic one from the gospel — a message of reconciliation."
For the past two years the Way of the Cross has been held in St. Peter's Square without the usual crowds, due to concerns over the coronavirus. But this year the solemn celebration returns to the Coliseum, where it has been held since the 18th century.
Francis used to carry the wooden cross from station to station himself, but now he assigns the meditations to different groups or individuals. Past bearers have included Roman children and prisoners.
The theme for this year's procession is the many "crosses" of family life. Besides the Russian and Ukrainian families, this year's procession will include reflections from a childless couple, families coping with illness and migrant families.
source: https://www.cbsnews.com/news/pope-francis-ukraine-russia-good-friday-way-of-the-cross-procession/