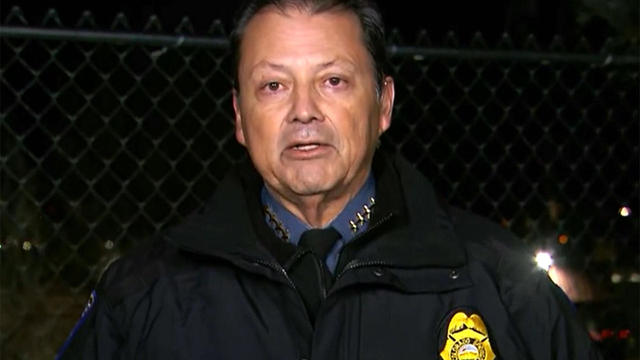 Colorado Springs Police Chief Adrian Vasquez credited two "heroic" patrons of Club Q who subdued the gunman firing inside the nightclub from preventing further tragedy.
"We really have to pay them great tribute for that," he said Monday on "CBS Mornings." "At least two patrons engaged with the suspect and were able to actually take him to the ground and subdue him, until officers got there and were able to take him into their custody."
Police say the gunman walked into the LGBTQ club and immediately began shooting with a "long rifle." Five people died and 25 were injured. Of those who were injured, Vasquez said at this time it does not appear that their injuries are life-threatening.
Club Q has been considered a safe space for the LGBTQ community in Colorado Springs for decades. They had planned this weekend to recognize the Transgender Day of Remembrance, honoring lives lost to violence.
Gov. Jared Polis, the first openly gay man elected governor in the U.S., said, "Colorado stands with our LGBTQ community." He called the shooting "horrific, sickening and devastating."
The club is referring to the shooting as a "hate attack."
Police have yet to determine a motive, but the suspect is in custody. Vasquez said the suspect is still hospitalized. "At some point he'll be released by the hospital and taken to the Criminal Justice Center," he said. "As soon as possible the individual will be charged."
Detectives say the suspect is 22-year-old Anderson Lee Aldrich, and that "interactions with law enforcement" are part of the investigation.
According to the El Paso County Sheriff's Office, a man with the same name and age was arrested in June 2021 for making a bomb threat that led to the evacuation of an entire neighborhood.
The threats — which included weapons and ammunition, according to the Colorado Springs Gazette — were reported to police by Aldrich's mother. But the case was dropped and sealed, raising questions about the state's almost two-year-old red flag laws, and whether something was missed.
Correspondent Janet Shamlian reports multiple agencies are involved in the investigation. Authorities say they found two weapons at the scene.
Vasquez told "CBS Mornings" co-host Gayle King that police were not yet ready to classify the shooting as a hate crime. "Of course, we're absolutely looking into those facets of the investigation," he said. "Our detectives will be combing through as much information as they can obtain and determine whether it was, indeed, a hate crime or not."
Vasquez called the event tragic.
"It just feels like an evil person has come in and done something horrific in this community. And that's not what we stand for. This police department is part of the community. I've been a Colorado native my entire life and have lived in Colorado Springs for 27 years. I just am terribly saddened.
"Club Q is a safe haven for this particular population. And I feel like I need to reach out and make sure that they understand the police department stands behind them through this event.
"I went to an event last night at the Temple Beit Torah, and it was all about, one, caring for the emotions and for these individuals that were either in the club or a part of the LGBTQ community. And my message to them is that they are part of this community just like I am. Our police department is here for them. We stand behind them. We're here to provide them the safety and security of every single citizen in this city. It's just a beautiful city to live in. I want them to enjoy it and to feel safe in our community."
One of the witnesses to Saturday's shooting, Joshua Thurman, described hearing gunshots and seeing a flash from the dance floor. He and another customer bolted to a dressing room, locked the door, and called 911. In an emotional interview, Thurman called Club Q "a place of welcome, a place of peace. A place for us to be ourselves.
"It was so scary, I heard shots. Broken glass. Bodies. It was — How? Why?"
Natalee Skye Bingham told Shamlian she was Facetiming her friend Kelly Loving, who was on her way to Club Q, just 10 minutes before the shooting. "She was going to go to the bar, grab a drink, go to the patio, smoke a cigarette and call me back. And that never happened," Bingham said. "Never heard from her."
She said Loving was one of those killed.
Bingham also lost five friends in 2016 when a gunman killed 49 people at Pulse, a gay nightclub in Florida.
She said Loving went to Club Q to go someplace welcoming.
"I want her to rest in peace to know I will fight for her," she told Shamlian. "I want justice for her. Because she didn't deserve that."
David Morgan is a senior editor at CBSNews.com and cbssundaymorning.com.
source: https://www.cbsnews.com/news/colorado-springs-police-chief-adrian-vasquez-club-q-shooting-patrons-subdued-gunman/