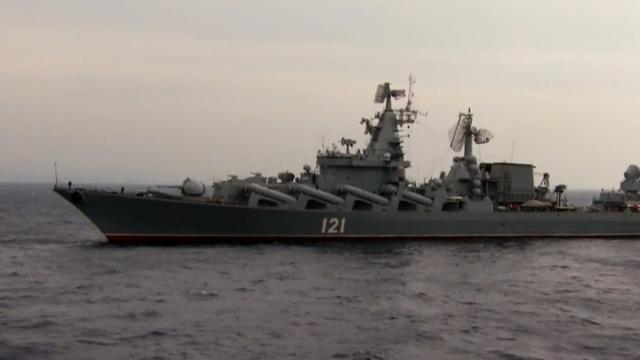 Russia's defense ministry warned Friday that Moscow would intensify its missile attacks on Ukraine's capital city, Kyiv, one day after Russia's flagship military vessel, the Moskva, sank in the Black Sea due to what Ukraine claimed was a Ukrainian missile strike. Russia said the symbolically important ship sank because of a fire.
Moscow said it would intensify strikes around Kyiv in retaliation for what it called Ukrainian "terrorist attacks" or "sabotage" on Russian territory. On Thursday, it accused Ukraine of carrying out attacks on Russian border areas.
In response, Ukraine's security services published audio it alleged was an intercepted phone call in which a Russian serviceman said Russian forces had carried out the attacks themselves. Neither the Russian nor the Ukrainian reports could be independently verified.
The Kyiv area was hit Friday by some of the most powerful explosions heard in two weeks, and Russia said it had targeted a Ukrainian missile plant. A renewed bombardment of the capital city itself could return residents to a heightened state of caution, after Russia's pullback from the area to refocus its attack on the eastern Donbas region.
Evidence of Russian atrocities continued to be collected by authorities around Kyiv from areas that had been occupied by Russian forces.
Ukraine's Prosecutor General Iryna Venediktova, told CBS News' Tony Dokoupil earlier this week that her department was investigating at least 6,000 cases of war crimes.
"It's very important to collect all evidence and to find all possibilities to work with international partners for all future proceedings in the court," she said.
Ukrainian lawmaker Oleksii Honcharenko took CBS News foreign correspondent Chris Livesay to the village of Havronschyna, where a family of five was allegedly gunned down as they tried to flee. The youngest was only two years old. A stroller could be seen in the family's burned out car, as well as snacks like apples and granola bars.
"I have son. My own son is three years old. It's so hard," Honcharenko said.
Local farmer Yuriy Patsan said he witnessed a Russian armored vehicle open fire on the family car with high-caliber explosive rounds, even though the car had a sign in the back window that read "children." He said he tried to save the family, but they died in his arms.
"All I could do was bury them. We're not dogs like the Russian soldiers," Patsan said.
Once the Russians left the area, Patsan and the Ukrainian police exhumed the bodies for investigation.
"It's definitely a war crime, because without any reason, civilians were killed," said Honrachenko. "The world should know that it is not fake. The world should know who is Russian regime. Who is Putin."
source: https://www.cbsnews.com/news/russia-warns-of-further-attacks-on-kyiv-after-sinking-of-flagship-moskva-warship/