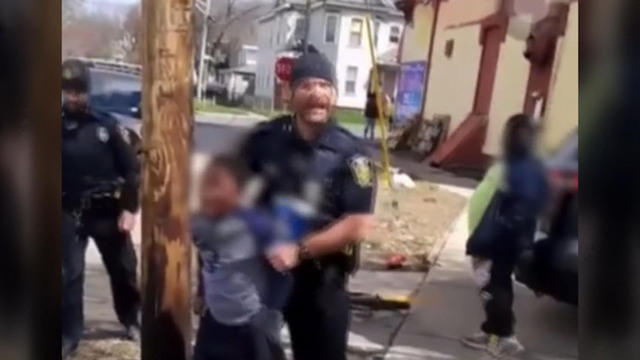 The Syracuse Police Department said they are looking into the actions of one of their officers after a viral video showed him detaining a crying 8-year-old boy.
The video, which has been viewed thousands of times, shows the crying boy being held from behind by an officer after he was detained for allegedly stealing a bag of chips. The boy was then placed inside a police vehicle.
Bystander Kenneth Jackson, who recorded the video, told CBS News that he felt compelled to capture what was happening.
"I felt his terror and decided to intervene," he said. "There's a way that the police need to interact with kids and what they did was completely unacceptable."
Anthony Weah, the father of the 8-year-old in the video said the boy was brought home by police. He said after watching the viral video, he feels as if police mistreated his son.
"I saw the video then I was very mad... An officer, who wears the uniform, who supposed to protect life and property, look at how he maltreated my son," Weah said.
Syracuse Mayor Ben Walsh said the officer knew the child from prior interactions.
The Syracuse Police Department said in a statement that the boy was not placed in handcuffs and officers met with the child's father. No charges were filed during the incident.
Syracuse Police officials said they are reviewing the body camera videos from all three officers involved in the incident.
"The incident, including the officers' actions and body-worn cameras, are being reviewed," the statement said.
Keith Taylor, a former police officer and now a professor at John Jay, said that the entire incident needs to be reviewed and when all the facts are known the department should be able to determine whether the officer should have handled the situation differently.
"Could there be improvements? Well, if the policy says that's what they're supposed to do, then you look at the policy," said Taylor.
source: https://www.cbsnews.com/news/syracuse-police-department-viral-video-crying-boy/