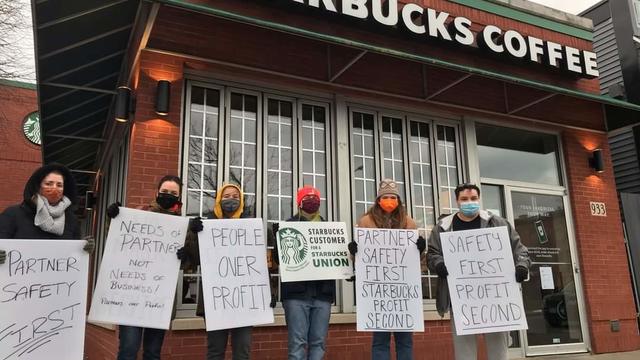 Starbucks surely didn't know what it was in for when the coffee chain hired Jaz Brisack toward the end of 2020. The 24-year-old former Oxford University Rhodes Scholar joined the company as a barista, but with a much grander plan than frothing milk for a living: unionizing one of America's best-known brands.
A year later, Brisack would prove instrumental in helping lead a Starbucks in Buffalo, New York, to become the first of the company's nearly 10,000 stores in the U.S. to vote in favor of joining a union. Since then, workers at nine more Starbucks in four states have unionized, while more than 100 stores have formally applied to hold elections.
"We're really excited to be some of the only partners in the country who actually have the right to be negotiating as equals with corporate," she told CBS MoneyWatch.
Brisack personifies a new generation of labor activist — one less daunted by the years of waning union membership than encouraged by recent successes, including a string of media companies organizing as well as an Amazon warehouse in New York becoming the first facility at the ecommerce giant to approve a union.
From an early age, Brisack took an interest the plight of those struggling with low pay and harsh working conditions. As a teenager she found herself galvanized by a speech delivered in 1918 by American socialist and trade unionist Eugene Debs, which she told CBS MoneyWatch "changed my life and inspired me to learn everything I could about unions."
That life-altering appeal had Debs opposing "a social order in which it is possible for one man who does absolutely nothing that is useful to amass a fortune of hundreds of millions of dollars, while millions of men and women who work all the days of their lives secure barely enough for a wretched existence."
Taking his words to heart, at 16 Brisack took a job washing dishes at a Panera Bread store, working alongside low-paid workers living without health insurance and subject to arbitrary scheduling practices.
Originally from Texas, Brisack also lived in Tennessee before winning a full scholarship to the University of Mississippi, where she took part in a failed United Auto Workers campaign to unionize a Nissan plant in Canton, Mississippi, and met then-UAW organizer Richard Bensinger.
"I hadn't really known that union organizing was something people did," Brisack said.
Knowing that autoworkers have died due to lackluster safety protocols, Brisack said the experience "taught me this is a fight literally for our lives. And with Omicron and COVID, it's still a fight for our lives."
The first female Rhodes scholar in the University of Mississippi's history, Brisack was asked by Bensinger the summer before she left for Oxford to join him in Buffalo, where he was working to organize a small coffee chain. She left for England knowing she'd return to the upstate New York city, and sped through her Rhodes in one year instead of the usual two.
Brisack returned and applied for a barista job at Starbucks at the end of 2020, then spent eight months working and waiting for the right moment.
"I wanted to work in the industry that I was organizing, and at least in Buffalo, that was largely the coffee retail industry," she said. "I wasn't thinking about Starbucks in particular," added Brisack, who only knew she wanted to organize from the ground up, working alongside those she wanted to unionize.
Starbucks did not respond to a request for comment.
The 71-year-old Bensinger took to calling Brisack and her fellow organizers "Generation Union," an acknowledgement that an army of 20-somethings is a driving force behind the recent upsurge in labor actions.
Still, "You don't have to be under the age of 30 to have these views," she said. "Richard and Bernie [Sanders] and some of my favorite grandfatherly men are helping us."
"I'm an opener at my store, and mostly work over the weekends now," said Brisack, who walked out with her colleagues in early January to demand better protections against COVID as the Omicron variant raced through her store.
The walkout came weeks after Brisack and her fellow workers voted 19 to 8 to unionize, becoming the first store to unionize among Starbucks' corporate-owned U.S. stores. Now part of Workers United, a unit of the Service Employees International Union, Brisack's store has already held multiple bargaining sessions with the law firm handling negotiations on behalf of Starbucks.
"This movement is only growing and getting stronger," Brisack said. "Starbucks is a company that is very focused on their brand, and an anti-union campaign is incompatible with that."
source: https://www.cbsnews.com/news/starbucks-union-jaz-brisack/