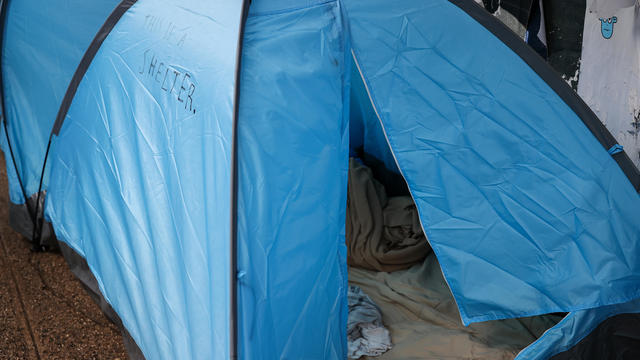 Tennessee lawmakers are close to sending Republican Gov. Bill Lee a proposal that would threaten felony penalties against homeless people who camp on local public property — including in parks — and misdemeanors for camping around highways.
The Tennessee Senate voted 20-10 Wednesday to advance the bill, with four Republicans joining Democrats in opposition. The House already passed a version of the legislation last year. Both Republican-dominated chambers need to hash out differences in what they approved.
Opponents have said the legislation does nothing to help reduce homelessness, while potentially making it harder for homeless people to rise out of extreme poverty if they have a felony on their records.
"When we allow our legislators to turn those who are society's most beaten down into criminals, we reject the very thing that gives us the right to call ourselves civilized: our capacity for compassion, for justice rooted in love for others rather than hate," Father Charles Strobel, founding director of homeless aid organization Room In The Inn, wrote in a newspaper guest column this week.
The Senate bill's sponsor, Republican Sen. Paul Bailey, said it would be left up to the local authorities whether to enforce the law. He argued that the bill does not criminalize homelessness.
The bill adds local public property to the existing felony penalties that are possible for camping on state property, as long as the place is not designated for people to camp there. The felony is punishable by up to six years in prison. Felony convictions in Tennessee result in the revocation of an individual's right to vote.
The penalties for camping on state property were increased from a misdemeanor to a Class E felony in 2020, when Republican lawmakers were responding to overnight protests on Capitol grounds calling for racial justice reform.
State law broadly defines illegal camping as certain activities during overnight hours. They include putting up a tent or furniture, storing personal belongings or food, cooking, sleeping or setting down something to sleep on, and starting a fire.
Arrests on local public property would have to be preceded by a warning at least 24 hours earlier. Items used to camp could be confiscated by authorities for 90 days, or longer if they are needed for evidence in a criminal case.
The bill also introduces a Class C misdemeanor, punishable by a $50 fine — which could be waived — and community service, for camping along highways, including under bridges or overpasses, or within an underpass. Violations in those locations would not be limited to overnight hours under the bill. Authorities would need to first offer a warning for people in violation.
The bill passed by the House goes further. It would add soliciting on or near a highway to the new misdemeanor violation.
Bailey, the Senate bill sponsor, said "lots of churches" testified against the bill, but said he thought they would have "open arms" to welcome them in if a rescue mission couldn't take them.
"I don't have the answer for homelessness," Bailey said. "Those that oppose this legislation, they don't have all the answers for homelessness. Those that support this legislation, they don't have all of the answers for homelessness."
Democratic Sen. Heidi Campbell, who said her Nashville district has a homeless camp that has been highly scrutinized, likened the approach to "putting a Band-Aid on cancer."
"I think we need to actually address the fundamental, root problem with these camps," Campbell said.
source: https://www.cbsnews.com/news/tennessee-legislation-felony-penalties-homeless-people-who-camp-on-public-property/