A battling Tiger Woods clawed his way out of early trouble to stay in the Masters hunt carding a second round two-over 74 where the wind gave him more problems than the right leg that he nearly lost in a career-threatening car crash. 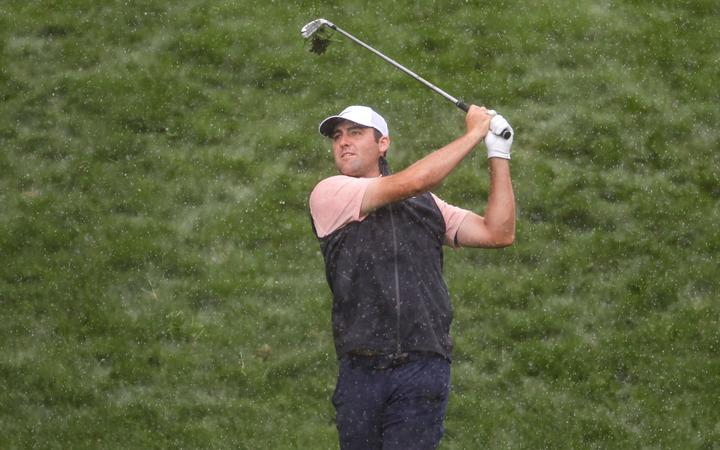 World number one Scottie Scheffler was among the few to tame the challenging conditions, posting a 67 to seize control of the leaderboard, charging five clear of the field on eight-under 136.

With winds blowing across Augusta National golfers were in full survival mode and none more so than Woods who took bogeys on four of his five opening holes threatening to derail the comeback that has captivated golf fans around the world.

But the 46-year-old's famous fight surfaced in time to put him one-over heading into Saturday's third round and nine back from front-running Scheffler.

"I got back in the ball game," said Woods. "I'm four shots back at second. That's the thing.

"But Scottie is running away with it right now."

"It's going to be the Masters that I think the Masters Committee has been looking forward to for a number of years.

With three wins in his last five PGA Tour starts, Scheffler showed why he is the hottest golfer on the planet taking a bogey on his first hole then going on to post the day's best round.

The 25-year-old American, even with a commanding five-shot lead, cannot afford to get complacent being chased by a trio of major winners including South Africa's Charl Schwartzel (69), the 2011 winner at Augusta National, Irishman Shane Lowry (68) the 2019 British Open winner, and defending Masters champion Hideki Matsuyama of Japan (69).

Also five back is South Korea's Im Sung-jae (74), the first round overnight leader.

As spectacular a round as Scheffler had it still was not enough to pry the spotlight away from Woods.

Playing his first competitive event in nearly 14 months Woods set the golf world alight on Thursday when he posted a one-under 71 to crank up expectations.

But he looked headed for an early exit when he stumbled to bogeys on four of his five opening holes, including three straight from the third.

Three-over walking onto the sixth tee and sliding dangerously close to the projected four-over cut line, Woods regrouped with nervy pars on six and seven before finally collecting his first birdie of the day at the eighth.

The five-times Masters champion got his back nine off to a much brighter start than his outward nine picking up a birdie at the 10th then gave it right back at the infamous Amen Corner with bogeys at 11 and 12.

But as he has done so many times before on the Augusta back nine Woods would not surrender, hitting back with birdies at 13 and 14 before closing with four consecutive pars.