'Full evacuation' of Mariupol called for as Russians take control

Russia pressed its new offensive in eastern Ukraine on Friday while in the port city of Mariupol, teams of volunteers collected corpses from the ruins after Moscow declared victory there despite Ukrainian forces holding out. 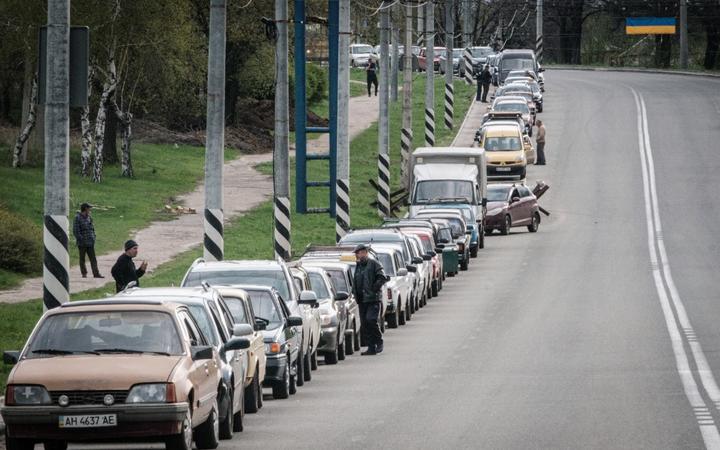 Local residents wait in line with their car to fill up with liquefied natural gas near a petrol station in Kramatorsk, eastern Ukraine, on April 21, 2022. Photo: AFP

Ukraine's general staff said Russian forces had increased attacks along the whole frontline in the east of the country and were trying to mount an offensive in the Kharkiv region, north of Russia's main target, the Donbas.

Russia says it has won the battle of Mariupol, the biggest fight of the war, having taken a decision not to try to root out thousands of Ukrainian troops still holed up in a huge steel works that takes up much of the centre of the city.

Kyiv says 100,000 civilians are still inside the city, and need full evacuation. It says Moscow's decision not to storm the Azovstal steel works is proof that Russia lacks the forces to defeat the Ukrainian defenders.

In a Russian-held section of the city, the guns had largely fallen silent and dazed looking residents ventured out on streets to a background of charred apartment blocks and wrecked cars. Some carried suitcases and household items.

Volunteers in white hazmat suits and masks roved the ruins, collecting bodies from inside apartments and loading them on to a truck marked with the letter "Z", symbol of Russia's invasion.

The United Nations and Red Cross say the civilian toll is still unknowable but at least in the thousands. Russia denies targeting civilians and says it has rescued the city from nationalists.

In Zaporizhzhia, where 79 Mariupol residents arrived in the first convoy of buses permitted by Russia to leave for other parts of Ukraine, Valentyna Andrushenko held back tears as she recalled the ordeal under siege.

"They (Russians) were bombing us from day one. They are demolishing everything. Just erase it," she said of the city.

Kyiv said no new evacuations were planned for Friday. Moscow says it has taken 140,000 Mariupol residents to Russia; Kyiv says many of those were deported by force in what would be a war crime.

The city's mayor, Vadym Boichenko, who is no longer inside Mariupol, said: "We need only one thing - the full evacuation of the population. About 100,000 people remain in Mariupol."

Western countries believe President Vladimir Putin is desperate to demonstrate a victory after his forces were defeated last month in an attempt to capture the capital Kyiv.

In a late-night address, Ukraine's President Volodymyr Zelensky said Russia was doing all it could "to talk about at least some victories".

"They can only postpone the inevitable - the time when the invaders will have to leave our territory, including from Mariupol, a city that continues to resist Russia regardless of what the occupiers say," Zelensky said.

The deputy commander of Russia's central military district said Russia planned to take full control of Donbas and southern Ukraine as part of the second phase of its military operation.

Rustam Minnekayev, quoted by the Interfax news agency, also said Russia planned to forge a land corridor between Crimea, the Black Sea peninsula which Russia annexed in 2014, and Donbas.

Abandoning the effort to defeat the last Ukrainian defenders in Mariupol - Donbas's main port - frees up more Russian troops for the main military effort, an assault from several directions on the towns of Kramatorsk and Sloviansk, to cut off the main Ukrainian military force in the east.

In a televised meeting at the Kremlin on Thursday, Putin congratulated his defence minister and Russian troops for the "combat effort to liberate Mariupol" and said it was unnecessary to storm the the Azovstal plant.

"There's no need to climb into these catacombs and crawl underground through these industrial facilities ... Block off this industrial area so that not even a fly can get through," said Putin.

The Kremlin leader, who has appeared only rarely in public in recent weeks, spoke hesitantly, barely above a whisper, squeezing the end of the table tightly with one hand throughout the 10-minute video clip released by the Kremlin.

British military intelligence also reported heavy fighting in the east as Russian forces tried to advance on settlements, but said the Russians were suffering from losses sustained early in the war and were sending equipment back to Russia for repair.

Russia calls its invasion a "special military operation" to demilitarise and "denazify" Ukraine. Kyiv and its Western allies reject that as a false pretext for a war that has killed thousands and uprooted a quarter of Ukraine's population.

The United States authorized another $US800 million in military aid for Ukraine on Thursday, including heavy artillery and newly disclosed "Ghost" drones that are destroyed after they attack their targets.

"We're in a critical window now of time where they're going to set the stage for the next phase of this war," US President Joe Biden said.