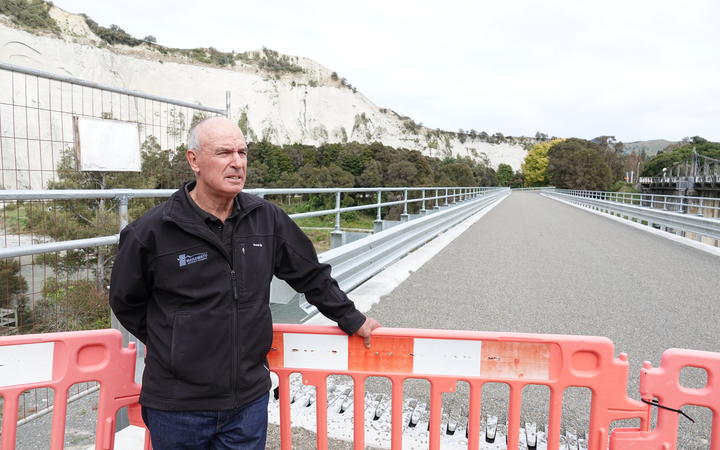 The new Mangaweka Bridge over the Rangitīkei River is scheduled to open in June, months too late for some.

Construction of the $11 million bridge, on the border of the Manawatū and Rangitīkei District Council boundaries, finished earlier this year and all that remains to be done is alignment work at each end and final checks.

Manawatū councillors have said the Rangitīkei council is responsible for the bridge remaining unused because it entered an agreement with local iwi that an opening ceremony would be held in June, and no traffic could pass until then.

But Rangitīkei mayor Andy Watson said the Manawatū council managed the contract and had advised it was working to a June opening date.

Whatever the reason, Manawatū District councillor Andrew Quarrie, who represents the rural wards, just wants the bridge to open, now.

Standing beneath the imposing grey cliffs carved out by the river, he looks at the finished structure and wonders why barriers are blocking traffic from travelling across.

"This had the opportunity of being a really good good news story. It was a bridge designed and built to service an area," he said.

"It was going to be opened six months earlier than planned, and instead of being a good news story it's become a laughing stock, an absolute joke.

"The bridge looks fantastic. It's a brand new structure, built to last another 100 years. It's great, really great."

He was told earlier this year the bridge would open in February, only for that to change. 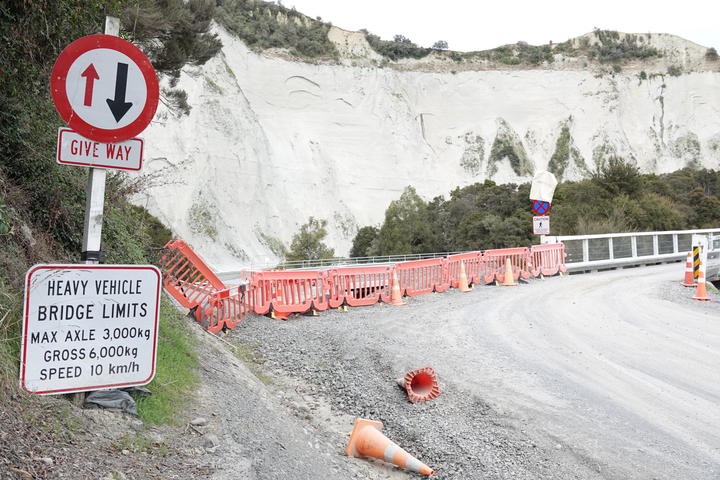 It would only take a few hours' work to be able to open the bridge to vehicles, Quarrie said.

"I think it's appalling. It's an appalling issue for the ratepayers who require this bridge for their economic well-being."

Construction started in 2020 and finished ahead of schedule.

The new bridge replaces a more-than-century-old one linking the Kawhatau Valley with Mangaweka, about 20km south of Taihape.

The old structure is open to vehicles weighing less than six tonnes, but that's no good for service trucks in an area of farms, orchards and forestry operations.

Since the old bridge was deemed unsafe for heavy loads in 2016, they've been forced to wend their way along an alternative route that can add 45 minutes of travel each way.

For drivers such as Barry Maher, an owner-operator of a trucking business, using the longer route is expensive.

"It's costing us extra for petrol and we know the price of that at the moment, so basically we're burning an hour's worth of fuel for no good reason.

"It's non-productive time. We could be doing a lot more with our time than going the long way around there."

Maher regularly carried loads of more than 40 tonnes of stock, metal or fertiliser.

"It's adding costs for the farms and it's already costing them extra at the moment anyway because our prices have all had to go through the roof."

Hautapu Pine director Susan Benson said transporting logs from its forest in the valley is costing an extra $3700 a month because trucks had to use a longer route.

Benson suggested a solution might be to bless the bridge and open it to traffic, then hold a more formal ceremony later. 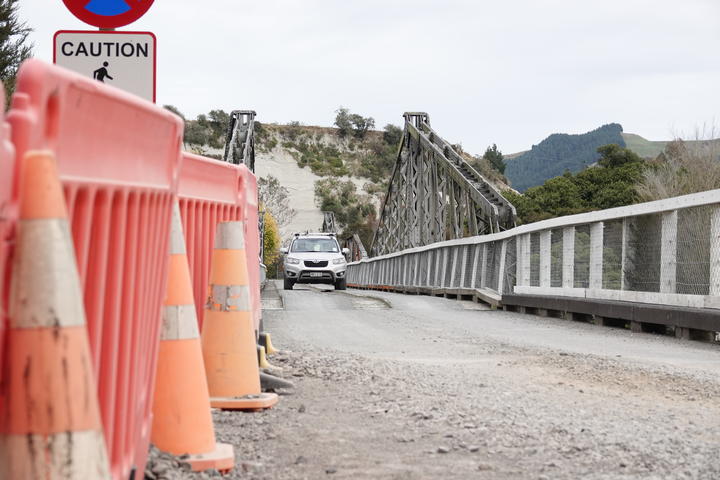 The old Mangaweka Bridge has stood for more than a century, but hasn't carried heavy vehicles in six years. Photo: RNZ/ Jimmy Ellingham

That ceremony is cited by Manawatū district councillors as the reason for the delay.

At a meeting earlier this month they unanimously passed a resolution to get their side of the bridge ready as quickly as possible.

RNZ has asked the council what work has been done since the council meeting on 7 April, but is yet to hear back.

Councillors discussed how the Rangitīkei council had agreed with local iwi Ngāti Hauiti an opening ceremony would happen in June, where a pou - a land post, would be unveiled.

Manawatū district mayor Helen Worboys said the iwi had been asked for its views on the bridge opening to traffic before the pou's installation, but the council hadn't heard back.

Rangitīkei mayor Andy Watson disputes the bridge could have opened in February and said the Manawatū council organised the contract.

"The June date was always part of the agreement that they entered into with Rangitīkei District Council with regard to iwi.

"As part of that agreement there would be a pou that would be constructed and that would be put in place before the bridge opened," he said.

"We are running ahead of time in terms of physical construction of the bridge and contractors need to come back and just finalise a cutover from the old bridge to the new bridge.

"I think we would be in a position in the next week or so to be able to announce a date and I think it will please all parties."

Watson said the Rangitīkei council was working with contractors on that, as well as talking with iwi.

For Kawhatau Valley resident Nicky Hobson, who runs an 800ha sheep and beef farm with husband Mark, the way forward is clear.

"What we want as farmers up this valley is we want to have access to the bridge now and when they're all ready, when they're sorted out their issues, they can officially open it."

The past few months had been busy, as stock went to the abattoir or other farms.

"Where in the world would you have a bridge that you're not allowed to drive on? We're absolutely desperate for that bridge to be open."