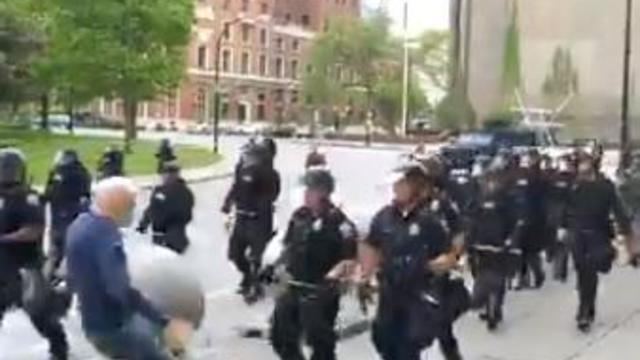 An arbitrator has ruled that two Buffalo police officers didn't violate the department's use-of-force guidelines when they pushed a 75-year-old protester to the ground in June 2020 during racial injustice protests following the murder of George Floyd in Minneapolis.
The episode drew national attention when a news crew captured video  of Martin Gugino being shoved by officers Robert McCabe and Aaron Torgalski in downtown Buffalo, as crowd control officers in riot gear cleared demonstrators for an 8 p.m. curfew.
Gugino, pushed backward, started bleeding after hitting his head on the pavement and spent about a month in the hospital with a fractured skull and brain injury.
BREAKING: Buffalo’s police commissioner orders immediate Internal Affairs investigation into this incident: 2 officers shoving an elderly man, who walked up to them, to the ground. @news4buffalo reports the man suffered a laceration & possible concussionpic.twitter.com/qbTvXAAPLH
In a decision Friday, arbitrator Jeffrey Selchick wrote, "Upon review, there is no evidence to sustain any claim that Respondents (police officers) had any other viable options other than to move Gugino out of the way of their forward movement."
The level of force used by the officers was justified because Gugino refused to comply with orders to leave the scene and was acting erratically and walked directly in front of McCabe, according to Selchick.
"The use of force employed by Respondents reflected no intent on their part to do more than to move Gugino away from them," he wrote.
McCabe and Torgalski were suspended without pay and arrested within days of the incident, but last year a grand jury declined to indict them and charges were dropped.
An attorney for Gugino, who has sued the city, told the Buffalo News that the ruling has no bearing on the lawsuit.
"We are not aware of any case where this arbitrator has ruled against on-duty police officers, so his ruling here on behalf of the police was not only expected by us, but was certainly expected by the union and city who selected and paid him," Melissa Wischerath told the newspaper.
Police Commissioner Joseph Gramaglia said in a statement he will reinstate the two officers to duty on Monday, the newspaper reported.
Email messages seeking comment were left Sunday with an attorney representing the city, which argued for the disciplinary charges, and with the Buffalo police union.
source: https://www.cbsnews.com/news/buffalo-officers-elderly-blm-protester-cleared-arbitrator/