U.K. blasted over "racist" plan to send asylum-seekers to Rwanda 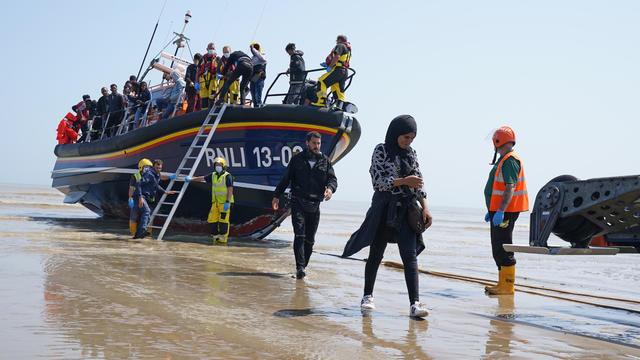 London — Britain will send migrants and asylum-seekers who cross the Channel thousands of miles away to Rwanda under a controversial deal announced Thursday as the government tries to clamp down on record numbers of people making the perilous journey.
"From today... anyone entering the U.K. illegally as well as those who have arrived illegally since January 1 may now be relocated to Rwanda," Prime Minister Boris Johnson said in a speech near Dover in southeastern England. "Rwanda will have the capacity to resettle tens of thousands of people in the years ahead."
He called the East African nation with a sketchy human rights record "one of the safest countries in the world, globally recognized for its record of welcoming and integrating migrants."
Johnson was elected partly on promises to curb illegal immigration but has instead seen record numbers making the risky Channel crossing.
He also announced that Britain's border agency would hand responsibility for patrolling the Channel for migrant boats to the navy.
More than 28,000 people arrived in Britain having crossed the Channel from France in small boats in 2021. Around 90% of those were male and three-quarters were men aged between 18 and 39.
The Rwanda plan swiftly drew the ire of opposition politicians who accused Johnson of trying to distract from his being fined for breaking coronavirus lockdown rules, while rights groups slammed the project as "inhumane."
Ghana and Rwanda had previously been mentioned as possible locations for the U.K. to outsource the processing of migrants, but Ghana in January denied involvement.
Instead, Kigali on Thursday announced that it had signed a multi-million-dollar deal to do the job, during a visit by British Home Secretary Priti Patel.
"Rwanda welcomes this partnership with the United Kingdom to host asylum seekers and migrants, and offer them legal pathways to residence" in the East African nation, Foreign Minister Vincent Biruta said in a statement.
The deal with Rwanda will be funded by the U.K. to the tune of up to 120 million pounds ($157 million), with migrants "integrated into communities across the country," it said.
In Dover, the English coastal city where many migrants arrive after crossing the Channel, some residents welcomed the announcement.
"They should be sent back, because it is not our responsibility," said retiree Andy, 68. "Our responsibility is to look after our own people, which we aren't doing," the heavily tattooed army veteran told AFP.
"I understand people escaping from repression, I do. But if they're coming over here for one thing, and that is money, to me that is wrong."
Refugee Action's Tim Naor Hilton accused the government of "offshoring its responsibilities onto Europe's former colonies instead of doing our fair share to help some of the most vulnerable people on the planet."
"This grubby cash-for-people plan would be a cowardly, barbaric and inhumane way to treat people fleeing persecution and war," he said.
Scotland's Health Secretary Humza Yousaf said the plan showed that the Conservative government was "institutionally racist."
UK Govt rightly provides asylum and refuge to Ukrainians fleeing war, but wants to send others seeking asylum thousands of miles away to Rwanda for "processing" - and you still question whether this heartless Tory Govt is institutionally racist?
The government "rightly provides asylum and refuge to Ukrainians fleeing war, but wants to send others seeking asylum thousands of miles away to Rwanda for 'processing'," Yousaf tweeted.
Australia has a policy of sending asylum seekers arriving by boat to detention camps on the Pacific island nation of Nauru, with Canberra vowing no asylum seeker arriving by boat would ever be allowed to permanently settle in Australia.
Since 2015 the U.K. has "offered a place to over 185,000 men, women and children seeking refuge (...) more than any other similar resettlement schemes in Europe," Johnson said.
According to the United Nations refugee agency, Germany received the highest number of asylum applicants (127,730) in Europe in 2021, followed by France (96,510), while the U.K. received the fourth largest number of applicants (44,190).
source: https://www.cbsnews.com/news/uk-rwanda-asylum-seekers-migrants-illegal-immigration-offshoring/