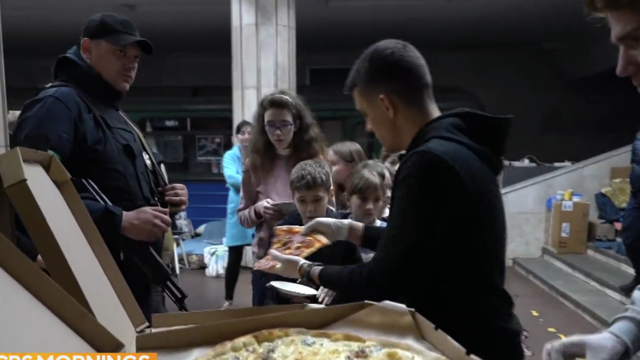 Dnipro, Ukraine - There was more evidence of war crimes in Ukraine as satellite images appeared to show mass graves just outside the southern city of Mariupol, in a territory controlled by Russia. Local officials accused Russia of burying thousands of civilians to hide the horrors that have taken place there, CBS News senior foreign correspondent Charlie D'Agata reported.
Thousands more Ukrainians remained trapped inside a steel plant in Mariupol, surrounded by forces loyal to Russian President Vladimir Putin, who earlier claimed victory in the city. Ukrainian officials said 100,000 people could still be stuck in Mariupol, which has been the site of some of the worst fighting in the war.
Ukraine's President Volodymyr Zelenskyy said that a proposed truce for the upcoming Orthodox Easter weekend had been rejected by Russia.
Civilian casualties continued to mount along the front lines of the fighting. In the eastern city of Kharkiv, which has suffered intense bombardment since the conflict began, the mayor said Russia continued to furiously bomb the city.
Yana Bachek was on her way to visit her father when she found out he had been killed by a chunk of shrapnel after stepping out of his apartment to buy bread.
"Even in a war, he tried to smile, to joke, to support us. He said, 'you are my brave girls, you are heroes,'" Bachek said.
Those daily risks prompted some of those seeking safety to live in the shelter of a subway tunnel for two months.
On the platform, Pavel Fedosenko, who works at Daddy's Pizza, handed out slices to excited children and their parents.
The tab was picked up by complete strangers — people who fled the city, who called up and ordered pizzas for those left behind.
"Now, we have foreigner donors who say they want to treat soldiers, military or paramedics to pizza," Fedosenko told CBS News.
Daddy's Pizza has gotten a PayPal account to keep up.
Fedosenko said it made him happy to bring a bit of joy to people who are suffering through so much.
"Bringing a little slice of happiness here, seeing kids laugh, a taste of normal life, it feels fantastic," he said.
source: https://www.cbsnews.com/news/ukraine-war-pizza-man-delivers-little-slice-of-happiness/