Disabled whio may have set new age record for her species

A disabled whio who can't fly may now be one of the oldest of her kind. 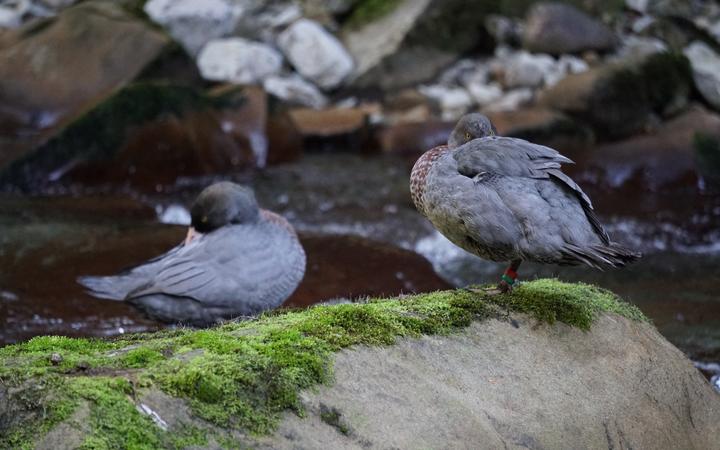 Whio, or blue duck, typically live to be about 12 years old, but this whio, which is missing its lower left wing, is now more than 14 years old.

The bird, called Tūmanako, lives in the Wangapeka River catchment area of Kahurangi National Park and was released there, along with six other females, in 2008.

The whio had been taken as eggs from wild pairs in Kahurangi National Park and reared at the Isaac Conservation and Wildlife Trust facilities in Christchurch to boost the Wangapeka-Fyfe Whio Security Site population.

In 2017 DOC staff monitoring whio in the park noticed Tūmanako was missing the lower part of her left wing.

DOC science technician Jason Malham said Tūmanako was spotted recently with her mate, and as she has now reached the age of 14 she may well have set a new age record for whio.

"Life would be tougher with the lower part of her wing missing as it would impede her movement. She wouldn't be able to fly and whio also use their wings for power when hopping from boulder to boulder in the river. She also lives in a rugged stretch of river with a steep gradient and numerous boulders as big as tables and cars."

Tūmanako is only known to have bred in 2012 but her eggs were lost through predation, possibly by a weka.