Ukrainian President Volodymr Zelensky says the Battle of the Donbas has begun. 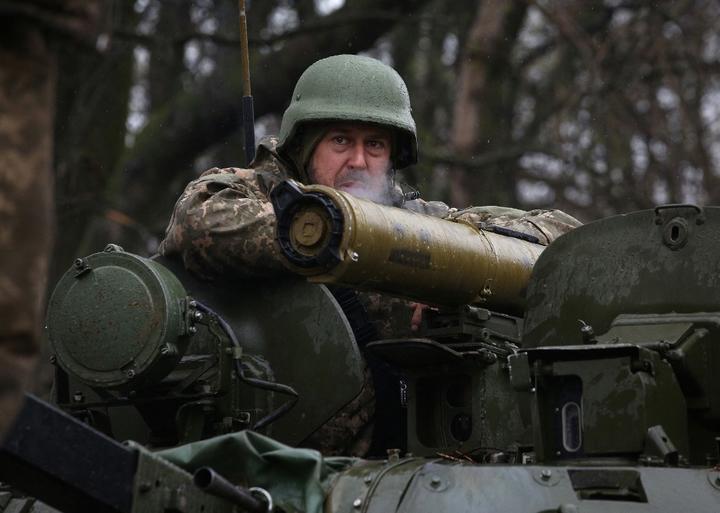 A Ukrainian soldier stands on an armoured personnel carrier in the Kharkiv region, not far from the frontline with Russian troops. Photo: AFP or licensors

His statement was made after Ukraine officials confirmed Russian forces had launched a new offensive push along most of Ukraine's eastern flank.

Ukraine's army has been bracing for a new Russian assault since Moscow retreated from earlier attempts to take the capital Kyiv - and shifted its forces to the east.

Donbas has been the scene of fighting with separatist groups since 2014.

"We can now say that Russian forces have started the battle of the Donbas, for which they have long prepared," Zelensky said in a video address.

"A very large part of the entire Russian army is now focused on this offensive."

In a post on Facebook, the Ukrainian armed forces command said that Russia's main military force was concentrating on taking control of the entirety of the Donetsk and Luhansk regions that make up the swathe of land known as the Donbas.

"The second phase of the war has begun... Believe in our army, it is very strong," the Ukrainian president's chief of staff, Andriy Yermak, wrote on the Telegram messaging app.

Driven back by Ukrainian resistance in the north, Moscow has refocused its ground offensive, bulking up its forces in the eastern Donbas with troops that it pulled out of Ukraine's north and neighbouring Belarus, a close Russian ally.

At the same time, Russia has been launching long-distance strikes at other targets including the Ukrainian capital, Kyiv.

Ukrainian officials said Russian shelling killed four people in the eastern Donetsk region on Monday, while a man and a woman were killed in Kharkiv when shells hit a playground near a residential building.

The regional governor of Kharkiv said authorities were continuing the evacuation of people from two areas where they expect fighting to take place.

Russia's reinforcements have set the stage for a protracted battle that military analysts say is certain to inflict heavy losses on both sides as the Russians try to encircle Ukraine's fighters dug in to defend the Donbas region.

Elsewhere, a Russian missile attack killed seven people in Lviv, the first civilian victims in the western city about 60 kilometres from Poland.

Maksym Kozytskyy, the governor of Lviv, said preliminary reports suggested there were four strikes there, three on warehouses that were not in use by the military and another on a car service station.

"It was a barbaric strike at a service station, it's a completely civilian facility," he told a news conference. 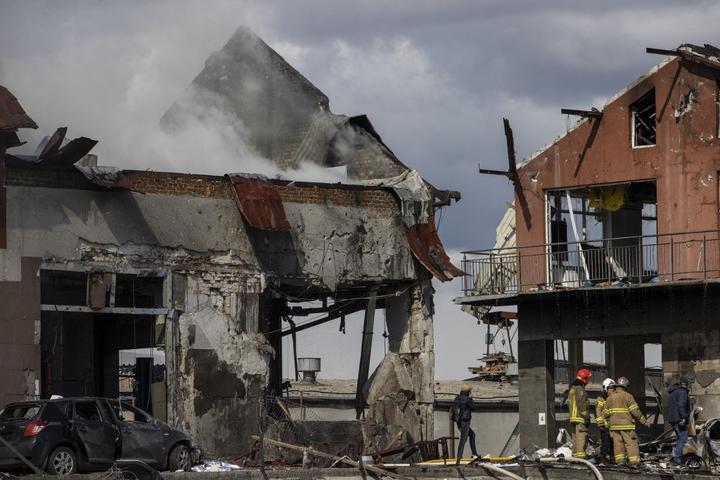 The mayor of Lviv, Andriy Sadoviy, said the youngest person killed was 30. The blast also wounded 11 and shattered windows of a hotel housing evacuees from elsewhere in the country, he added.

"Seven peaceful people had plans for life, but today their life stopped," he said.

Russia's defence ministry said it had hit hundreds of military targets in Ukraine overnight. It said air-launched missiles had destroyed 16 military facilities in the Kharkiv, Zaporizhzhia, Donetsk and Dnipropetrovsk regions and in the port of Mykolayiv, which are in south and east Ukraine.

It added that the Russian air force had launched strikes against 108 areas where Ukrainian forces were concentrated and Russian artillery struck 315 Ukrainian military targets.

Russia denies targeting civilians in what it calls a special operation to demilitarise Ukraine and eradicate dangerous nationalists. It rejects what Ukraine says is evidence of atrocities, saying Ukraine has staged them to undermine peace talks.

Last week, US President Joe Biden announced an additional US$800 million (NZ$1.2bn) in military assistance to Ukraine, expanding the aid to include heavy artillery ahead of a wider Russian assault expected in eastern Ukraine.

The US military expects to start training Ukrainians on using howitzer artillery in coming days, a senior US defence official said on Monday, adding that the training would take place outside Ukraine.

French President Emmanuel Macron said on Monday his dialogue with Putin had stalled after mass killings were discovered in Ukraine. 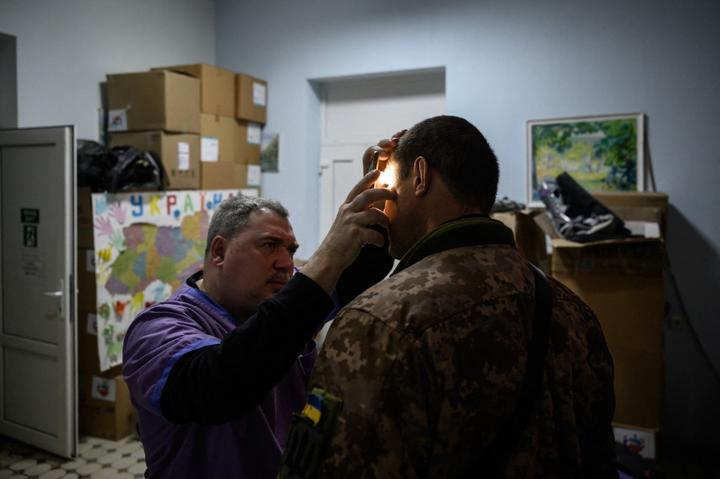 A medical staff member checks the eyes of a soldier at a military hospital in Zaporizhzhia in south-eastern Ukraine. Photo: AFP or licensors

Russia has been trying to take full control of the south-eastern port city of Mariupol, which has been besieged for weeks and which would be a huge strategic prize, linking territory held by pro-Russian separatists in the east with the Crimea region that Moscow annexed in 2014.

Major Serhiy Volyna, commander of Ukraine's 36th marine brigade which is still fighting in Mariupol, appealed for help in a letter to Pope Francis, saying women and children were trapped among fighters in the city's steel works.

"This is what hell looks like on earth ... It's time (for) help not just by prayers. Save our lives from satanic hands," the letter said, according to excerpts tweeted by Ukraine's ambassador to the Vatican.

No fewer than 1,000 civilians were hiding in underground shelters beneath the vast Azovstal steel plant, the city council said on Monday.

Azovstal is the main remaining stronghold of Ukrainian forces in Mariupol. The city's defenders include Ukrainian marines, motorised brigades, a National Guard brigade and the Azov Regiment, a militia created by far-right nationalists that was later incorporated into the National Guard.

Denis Prokopenko, a lieutenant colonel of the Azov Regiment, said in a Telegram video post that while he was at the steel plant, Russian and separatist forces were dropping anti-bunker bombs and blasting the area with rockets and other weapons, including from ships, "knowing that there are civilians here".

Russia's invasion has damaged or destroyed up to 30 percent of Ukraine's infrastructure at a cost of US$100bn (NZ$148bn), a Ukrainian minister said, adding reconstruction could be achieved in two years using frozen Russian assets to help finance it.

The United Nations said on Monday the civilian death toll from the war had surpassed 2,000, reaching 2,072 as of midnight on 17 April from the start of the Russian invasion on 24 February.

About four million Ukrainians have fled the country.