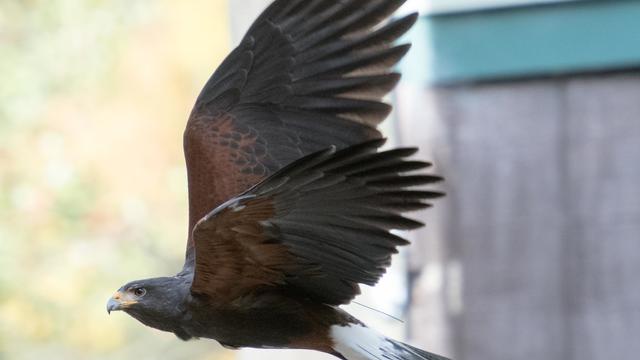 A beloved hawk from Zoo Atlanta has died after apparently getting into an altercation with a wild animal. The hawk, named Tahoe, had been a part of the zoo's wildlife theater for more than 20 years.
The zoo is still actively investigating the cause of death, but they believe Tahoe, who lived in a secure outdoor meadow, got into a fight with an animal that was not a part of the zoo.
"Our Animal Care and Veterinary Teams are vigilant about protecting the safety of all members of our animal population and the facilities in which they are housed, all while appreciating the fact that, given our fortunate park setting, we share our grounds with native wildlife," the zoo said in a statement on Facebook.
The Zoo Atlanta family is deeply saddened to share news of the death of Tahoe the Harris hawk, a beloved longtime member...
The zoo is now assessing the bird mews and looking into additional safety measures. They are scouring the area for "feces, hair, or other sources that may shed clues" regarding how the death occurred.
Tahoe joined the zoo shortly after he was born in 1999. He is Harris hawk, which are known as "the wolves of the sky," according to the zoo. He performed in the zoo's World of Wild Theater.
"Tahoe appeared to enjoy his opportunities for flights above an audience, and really seemed to enjoy flying low enough to cause a stir," said Rebecca Young, curator of Ambassador Animals and a member of the team who knew Tahoe best. "He was a bird who made you work for your relationship with him, and he made you work to keep it."
Also referred to as "Harris's Hawks," the birds are common in the deserts of Arizona as well as mesquite brushlands in Texas and New Mexico. They hunt small mammals like squirrels, rabbits and rats, as well as birds and lizards, and sometimes insects.
Caitlin O'Kane is a digital content producer covering trending stories for CBS News and its good news brand, The Uplift.
source: https://www.cbsnews.com/news/hawk-at-zoo-atlanta-dead-wild-animal-altercation/