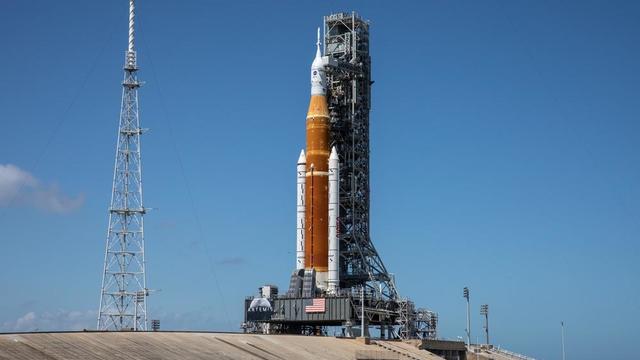 NASA's gargantuan new moon rocket will be hauled off the launch pad and back to its processing hangar next week to correct a variety of problems with ground and flight systems that derailed three dress-rehearsal fueling attempts.
When the Space Launch System rocket might be ready for its long-awaited maiden flight, sending an unpiloted Orion crew capsule beyond the moon and back, is not yet known, but NASA managers agreed Friday that a June launch window will be "challenging" at best. They would not speculate on how the repair work might play out.
"The operations are really complicated, and we want to make sure that we get them right," said Tom Whitmeyer, a senior exploration systems manager at NASA Headquarters. "So that's why I think the agency feels more comfortable in providing you information once we get through with wet dress and actually have a successful tanking operation."
The 33-story SLS rocket, the most powerful ever built by NASA, is billions over budget and years behind schedule. Mounted atop a mobile launch platform, it was hauled from the Kennedy Space Center's Vehicle Assembly Building to pad 39B on March 18 for a critical dress-rehearsal countdown and fueling exercise.
But three attempts to load the rocket with more than 750,000 gallons of supercold liquid oxygen and hydrogen fuel failed because of a variety of procedural and hardware-related problems, including trouble getting enough gaseous nitrogen to the launch pad for safety systems and, more troublesome, a hydrogen leak in a launch pad umbilical fitting.
Other problems included a faulty valve in the rocket's upper stage that cannot be replaced at the launch pad. That prevented any attempt to fuel the Interim Cryogenic Propulsion System stage.
Over the weekend, NASA announced that instead of making a fourth attempt to at least fuel the SLS core stage, the rocket will be hauled back to the Vehicle Assembly Building for repairs.
Despite the time lost to date, "we will absolutely go back out, we're absolutely going to do a dress rehearsal, we'll demonstrate cryo loading and we also demonstrate terminal countdown," Whitmeyer said. "It's just a matter of what's the right time and what's the right way to do that, and how that might fit in our forward scheduling."
Launch Director Charlier Blackwell-Thompson said three general options are under consideration.
In one, which she called the "VAB quick-turn (around) option," engineers will repair the leaky hydrogen fitting in the Vehicle Assembly Building and install a replacement hydrogen "check valve" in the upper stage while the company operating the nitrogen supply pipeline to the space center implements upgrades to ensure adequate flow.
"And then we would look to roll back out (to the pad) and get that wet dress attempt behind us," she said. "There's a second option that looks at doing a greater amount of work in the VAB, maybe getting closer to your rollout-for-flight configuration."
As with the first option, the rocket would be rolled back to the pad for a full-up wet dress countdown, then back to the VAB for final work followed by rollout to the pad for launch.
"And a third option ... looks at whether or not you could do a wet dress and launch in one rollout campaign," she said. "So there's still work to do on all three of those. I think it would be premature to speculate on which of those would be the leading candidate."
Bill Harwood has been covering the U.S. space program full-time since 1984, first as Cape Canaveral bureau chief for United Press International and now as a consultant for CBS News. He covered 129 space shuttle missions, every interplanetary flight since Voyager 2's flyby of Neptune and scores of commercial and military launches. Based at the Kennedy Space Center in Florida, Harwood is a devoted amateur astronomer and co-author of "Comm Check: The Final Flight of Shuttle Columbia."
source: https://www.cbsnews.com/news/nasa-moon-rocket-heading-back-to-hangar-for-repairs/