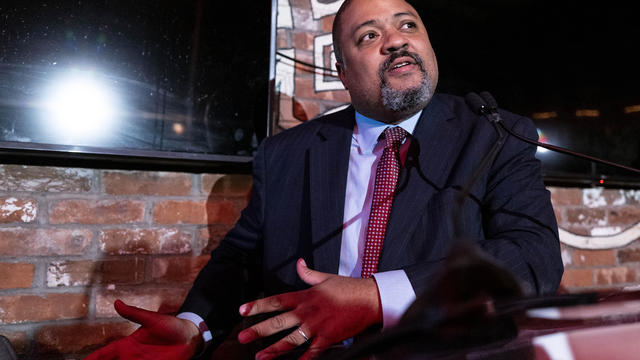 Manhattan's district attorney reiterated Thursday that a long-running criminal investigation into former President Donald Trump and his company remains active.
Alvin Bragg, who took over the investigation when he came into office on Jan. 1, 2022, said in a statement Thursday that his investigators and prosecutors are "exploring evidence not previously explored."
Bragg's office has had  a number of high-profile resignations since he succeeded former district attorney Cyrus Vance Jr., including the two prosecutors who had been leading the Trump investigation, Carey Dunne and Mark Pomerantz.
In Pomerantz's resignation letter, which was published in The New York Times, Pomerantz alleged that Vance "concluded that the facts warranted prosecution," but that Bragg had "reached the decision … not to seek criminal charges at the present time."
Thursday's statement marked Bragg's first public comment since Pomerantz and Dunne resigned. His office has repeatedly insisted the investigation, which led to charges being filed last July against the Trump Organization and its CFO, is ongoing.
"In the long and proud tradition of white-collar prosecutions at the Manhattan D.A.'s Office, we are investigating thoroughly and following the facts without fear or favor," Bragg said Thursday.
The Trump Organization and its CFO, Allen Weisselberg, in February asked a judge to dismiss the criminal case against them. The company was charged in July with  allegedly  providing executives with lavish untaxed perks, or "indirect employee compensation." Weisselberg, who had been at Trump's side at the company for decades, was accused of receiving perks — including an apartment and car — worth $1.7 million.
They have denied all charges.
Bragg said in the statement on Thursday that the team is led by Susan Hoffinger, a prosecutor with "decades of experience as an Assistant District Attorney and a defense attorney, including New York State grand jury and trial experience."
Bragg also highlighted his own bona fides, noting that he took on "high-profile, complex investigations" as a federal prosecutor, and "oversaw the successful litigation against the former president, his family, and the Trump Foundation" as chief deputy at the New York Attorney General's Office.
An attorney for Trump could not immediately be reached.
Bragg's statement came hours after New York's Attorney General, Letitia James, asked a judge to hold Trump in contempt for allegedly failing to comply with a court order to turn over documents in her office's parallel civil investigation.
Trump has repeatedly accused James, Bragg and Vance of pursuing the cases against him out of political vendetta.
Graham Kates is an investigative reporter covering criminal justice, privacy issues and information security for CBS News Digital. Contact Graham at [email protected] or [email protected]
source: https://www.cbsnews.com/news/trump-criminal-probe-ongoing-manhattan-district-attorney-alvin-bragg/