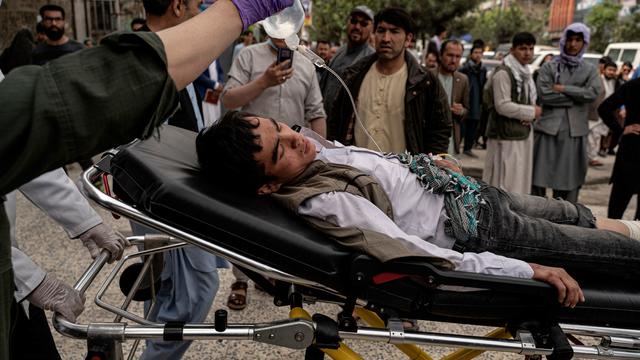 Explosions targeting educational institutions killed at least six people, including students, and injured 17 Tuesday in a mostly Shiite neighborhood of Afghanistan's capital city, police said. The blasts, which occurred in rapid succession, were being investigated and more casualties were feared, according to Kabul police spokesman Khalid Zadran and the city's Emergency Hospital. Several of the wounded were in serious condition and some had been treated and released. The explosions occurred inside the Abdul Rahim Shaheed High School and near the Mumtaz Education Center several miles away, both in the predominately Shiite Muslim neighborhood of Dasht-e-Barchi. There were no immediate reports of casualties at the Mumtaz Center. Guards in the narrow street leading to the two-story high school said they saw 10 casualties. Inside the school, an Associated Press video journalist saw walls splattered with blood, burned notebooks and children's shoes.
The AP spoke to several private guards in the area but they refused to give their names, fearing repercussions from the Taliban security force cordoning off the area. It appeared a suicide bomber blew himself up inside the sprawling compound, which can house up to 1,000 students, witnesses said. It wasn't immediately clear how many children were in the school at the time of the explosion. The school is teaching students only until the sixth grade after Afghanistan's hardline Taliban rulers went back on a promise to allow all girls to attend school. No one has immediately claimed responsibility. The area has been targeted in the past by Afghanistan's deadly Islamic State affiliate, which reviles Shiite Muslims as heretics. Save the Children in Afghanistan issued a statement "strongly condemning " the attack and saying "no school should be deliberately targeted, and no child should fear physical harm at or on the way to school." The Islamic State of Iraq and Syria affiliate known as ISIS in Khorasan Province, or ISIS-K, has previously targeted schools particularly in the Shiite dominated Dasht-e-Barchi neighborhood. In May last year, months before the Taliban took power in Kabul more than 60 children, mostly girls, were killed when two bombs were detonated outside their school, also in the Dasht-e-Barchi neighborhood. ISIS has presented the biggest security challenge to the country's Taliban rulers, who swept into Kabul last August as the United States ended its 20-year war.
source: https://www.cbsnews.com/news/blasts-targeting-kabul-afghanistan-schools-kill-at-least-6-civilians/