The Dunedin City Council wants the anti-mandate protesters camped out in the city's Octagon to leave, saying their cause has now run its course. 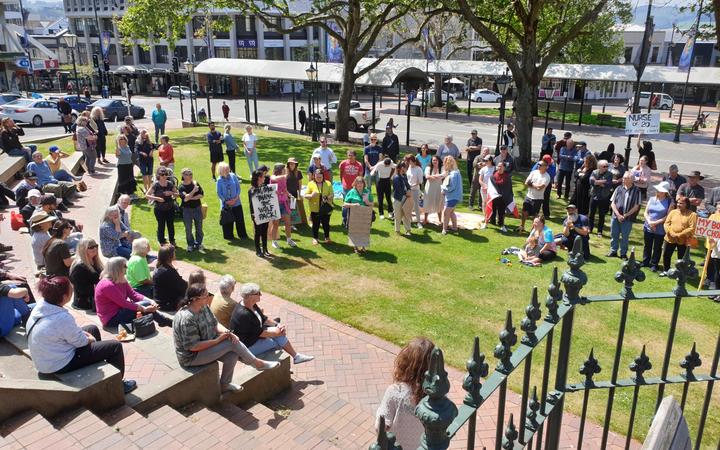 The group has been there for two months.

Mayor Aaron Hawkins said the council had allowed them the right to protest but with the lifting of vaccine pass requirements and most mandates, there was no reason to remain.

"We met with police yesterday to discuss next steps, today we will formally write to them advising them of the offences they are committing under the Reserves Act and our bylaws and they will be given an opportunity to cease their offending and leave the Octagon.

"If they decline, we will then work through a process with police to issue a trespass notice."

He said the group small and had largely been peaceful but there was now no clear purpose for them to still be there.

"It hasn't had the same atmosphere as we've seen in other iterations of this, notably in Wellington, and that's to be commended, but it doesn't change the fact that it is disruptive now without a clear purpose.

"There is certainly a level of frustration in the community about the ongoing nature of their presence in the Octagon view and certainly on Tuesday as we've entered the next stage of the Covid response and Covid protection framework it's become even more obvious to people in the community that this isn't something that they can tolerate for much longer."

Hawkins said the letter they would be given today would have a date to leave by on it.

"It will certainly be before Easter."

He said footage on social media this morning of a portaloo at the site being removed was not anything to do with council.

"My understanding is that has been taken away by the company that hires out that kind of infrastructure... [the portaloo] wasn't being provided by us either.