The United States and Europe are planning new sanctions to punish Moscow over civilian killings in Ukraine, and President Volodymyr Zelensky warned more deaths were likely to be uncovered in areas seized from Russian invaders. 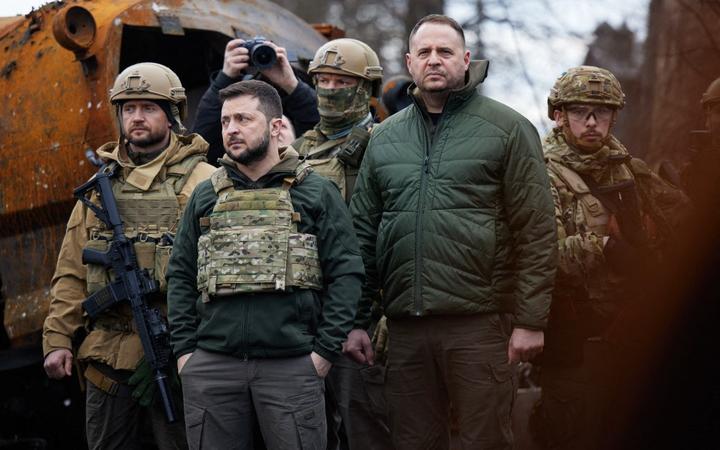 Searing images of a mass grave in Bucha and the bound bodies of people shot at close range drew an international outcry on Monday.

US President Joe Biden called for a war crimes trial against Russia's President Vladimir Putin and the United States will ask the UN General Assembly to suspend Russia from the Human Rights Council.

Russia denied any accusations related to the murder of civilians and said it would present "empirical evidence" to a meeting of the United Nations Security Council on Tuesday proving its forces were not involved.

In an early morning video address, Zelensky said he would also address the Security Council on Tuesday as he builds support for an investigation into the killings in Bucha.

"And this is only one town. One of many Ukrainian communities which the Russian forces managed to capture," Zelenskiy said. "Now, there is information that in Borodyanka and some other liberated Ukrainian towns, the number of casualties of the occupiers may be even much higher," he added, referring to a town 25km west of Bucha.

Reuters saw several bodies apparently shot at close range, along with makeshift burials and a mass grave in Bucha, but could not independently verify the number of dead or who was responsible.

Ukraine's foreign minister, Dmytro Kuleba, said he spoke with UN Secretary-General Antonio Guterres about Bucha and stressed "that Ukraine will use all available UN mechanisms to collect evidence and hold Russian war criminals to account". 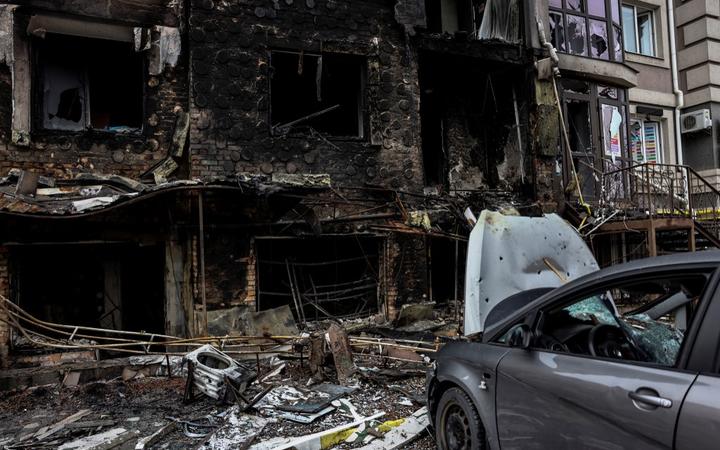 A destroyed building is pictured in Bucha, northwest of Kyiv, on 2 April, 2022. The town was liberated after a month-long occupation by Russian soldiers. Photo: AFP or licensors

Russia launched what it calls a "special military operation" in Ukraine on 24 February, aiming to demilitarise and "denazify" Ukraine. Ukraine and the West say the invasion was illegal and unjustified.

Russian forces pulled back from Kyiv in the face of unexpectedly lethal and mobile Ukrainian resistance using Western anti-tank weaponry.

Moscow painted the withdrawal as a goodwill gesture at peace talks, which last convened on Friday. Negotiators had been due to convene on Monday, but neither side has given an update on the talks.

German Chancellor Olaf Scholz said on Monday that Putin and his supporters would "feel the consequences" of events in Bucha and that Western allies would agree further sanctions against Moscow in the coming days.

Biden's national security adviser, Jake Sullivan, said new US sanctions against Moscow would be announced this week. The US State Department said it was supporting an international team of prosecutors and experts to collect and analyse evidence of atrocities.

France and Germany said they would expel Russian diplomats.

"It will be cheaper for everyone. And then we will end up just looking at each other in no other way than through gunsights."

German Defence Minister Christine Lambrecht said the European Union must discuss banning Russian gas, though other officials urged caution around measures that could touch off a European energy crisis.

Russia supplies about a third of Europe's gas, and Putin has tried to use energy as a lever to fight back against Western sanctions. But Moscow has maintained gas flows through key pipeline routes into Europe, despite uncertainty over Putin's demands for payments in roubles.

Russia's latest sovereign bond coupon payments have been stopped, a source familiar with the matter and a spokeswoman for the US Treasury said, putting it closer to a historic default.

Ukraine said it was preparing for about 60,000 Russian reservists to be called in to reinforce Moscow's offensive in the east, where Russia's main targets have included the port of Mariupol and Kharkiv, the country's second-largest city.

In Mariupol, a southeastern town on the Azov Sea that has been under siege for weeks, Reuters images showed three bodies in civilian clothes lying in the street, one against a wall sprayed with blood.

Ukraine says it has evacuated thousands of civilians in the past few days from Mariupol, which is surrounded by areas held by Russian-backed separatists in the eastern Donbas region.

A team from the International Committee of the Red Cross was stopped during an attempt to reach Mariupol to evacuate civilians, and is now being held in a nearby town, a spokesperson said on Monday.

West of Mariupol, in the town of Mykolaiv, shelling on Monday killed 10 people, including a child, and injured 46 others, regional administration head Oleksandr Senkevich said. Reuters was not immediately able to verify the report.