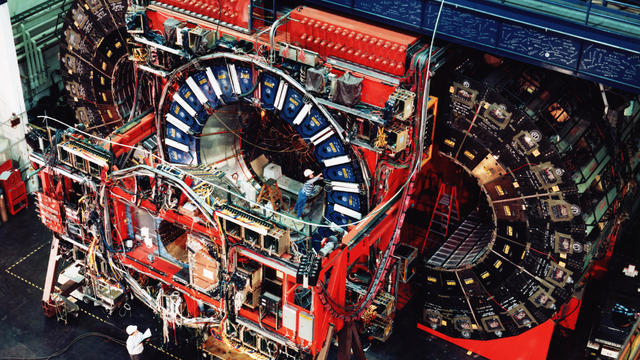 After a decade of meticulous measurements, scientists announced Thursday that a fundamental particle -- the W boson -- has a significantly greater mass than theorized, shaking the foundations of our understanding of how the universe works.
Those foundations are grounded by the Standard Model of particle physics, which is the best theory scientists have to describe the most basic building blocks of the universe, and what forces govern them.
The W boson is an electrically charged fundamental particle that governs what is called the weak force, one of the four fundamental forces of nature, and therefore a pillar of the standard model.
However, the most precise measurement ever of the W Boson directly contradicts the rules of the Standard Model, according to a new study published in Science journal.
Ashutosh Kotwal, a physicist at Duke University who led the study, said that the result had taken more than 400 scientists over 10 years to record and scrutinize a "dataset of around 450 trillion collisions".
These collisions -- made by smashing the particles together at mind-bending speeds to study them -- were made by the Tevatron collider in Illinois.
It was the world's highest-energy particle accelerator until 2009, when it was supplanted by the Large Hadron Collider near Geneva, which famously observed the Higgs boson a few years later.
The Tevatron stopped running in 2011, but the scientists at the Collider Detector at Fermilab (CDF) have been crunching numbers ever since.
Harry Cliff, a particle physicist at Cambridge University who works at the Large Hadron Collider, said the standard model is "probably the most successful theory and scientific theory that has ever been written down -- it can make fantastically precise predictions".
But if those predictions are proved wrong, it cannot merely be tweaked.
"It's a like a house of cards, you pull on one bit of it too much, the whole thing comes crashing down," Cliff told AFP.
But the standard model is not without its problems.
For example, it doesn't account for dark matter, which is thought to make up 95 percent of the universe.
On top of that, "a few fissures have recently been exposed in the standard model," physicists said in a companion Science article.
"In this framework of clues that there are missing pieces to the standard model, we have contributed one more, very interesting, and somewhat large clue," Kotwal told AFP.
Jan Stark, physicist and director of research at the French CNRS institute, said "this is either a major discovery or a problem in the analysis of data," predicting "quite heated discussions in the years to come".
He told AFP that "extraordinary claims require extraordinary evidence."
The CDF scientists said they had determined the W boson's mass with a precision of 0.01 percent -- twice as precise as previous efforts.
They compared it to measuring the weight of a 350-kilogram (800-pound) gorilla to within 40 grams (1.5 ounces).
They found it was different than the standard model's prediction by seven standard deviations, which are also called sigma.
Cliff said that if you were flipping a coin, "the chances of getting a five sigma result by dumb luck is one in three and a half million".
"If this is real, and not some systematic bias or misunderstanding of how to do the calculations, then it's a huge deal because it would mean there's a new fundamental ingredient to our universe that we haven't discovered before."
However, he added that "if you're going to say something as big as we've broken the standard model of particle physics, and there's new particles out there to discover, to convince people of that you probably need more than one measurement from more than one measurement."
CDF co-spokesperson David Toback said that "it's now up to the theoretical physics community and other experiments to follow up on this and shed light on this mystery".
And after a decade of measurements, Kotwal isn't done yet.
"We follow the clues and leave no stone unturned, so we'll figure out what this means."
source: https://www.cbsnews.com/news/w-boson-measurement-contradicts-understanding-universe-scientists-say/