Nasa to send another balloon from the South to the stratosphere

Nasa's science balloon team is back in Wanaka. 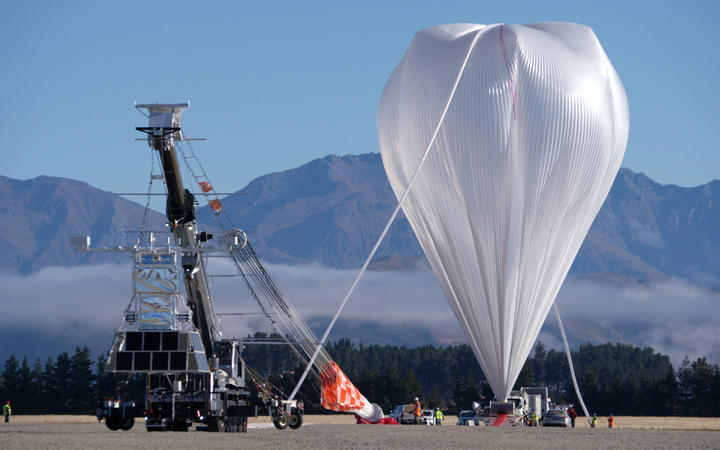 Trucks carrying helium gas tanks are parked at Wanaka Airport and technicians are working from a hangar, preparing for a flight next month, Queenstown Airport Corporation chief executive Glenn Sowry confirmed this week.

It is not known how many staff from Nasa's Columbia Scientific Balloon Facility are in Wanaka, but it is understood the United States space agency's presence in the town is very low key.

Attempts to contact Nasa head of communications Jeremy Eggers have been unsuccessful.

It would be Nasa's fourth Wanaka mission since 2015.

Scientists hope it will shed light on whether dark matter slows down during collisions.

The goal has always been to achieve a 100-day flight, but in 2015 the first $1.6 million balloon and payload (weighing a total of 3856kg) sprung a leak over the Australian outback and was brought to a controlled "crash landing" after 32 days.

That launch was still regarded as a success, as the balloon had nearly completed a full trip around the world, maintaining a constant float altitude of 33.5km in harsh stratospheric conditions, balloon office chief Debbie Fairbrother said.

Wanaka's first balloon did not carry a science experiment but in 2016, Nasa put the Compton Spectrometer in the payload.

The 2016 balloon successfully circumnavigated the world and the spectrometer allowed University of California, Berkeley scientists to observe their first gamma ray bursts, a phenomenon associated with deep space astrophysical sources, such as supernovas and black hole formation.

The record for a Nasa superpressure balloon flight is 54 days.

When fully inflated and sailing at 33.5km above Earth, the balloon is about the size of the Forsyth Barr Stadium in Dunedin.

Nasa's science balloon flight programme conducts between 10 and 15 flights each year from launch sites around the world, including in the Antarctic.

More than 1700 scientific balloons have been launched in over 35 years of operation.

* This story first appeared in the Otago Daily Times.