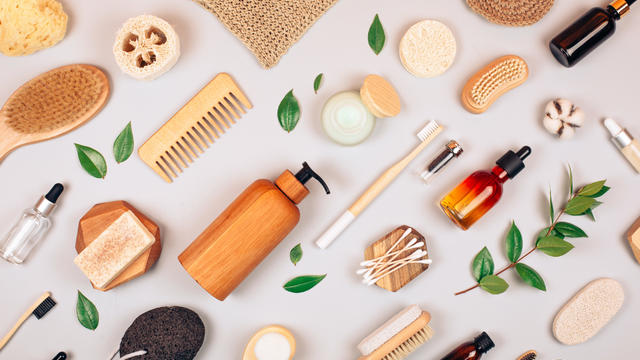 As the idea of living sustainably becomes more popular, there are more products than ever that seem to make that easier than ever. With Earth Day and the ongoing climate crisis, companies are intensely marketing those products and their services with promises of helping the planet.
Don't be fooled.
Some of the eco-conscious promises that companies are making are more about the bottom line and gaining customers. That phenomenon even has a name — greenwashing — coined by environmental activist Jay Westerveld in the 1980s. According to The Guardian, Westerveld first got the idea for the term when he visited a hotel in Samoa and saw a sign posted asking people to reuse their towels to help save the environment.
The hotel was expanding. As Westerveld saw it, refraining from washing towels and sheets every day is greener, but that gesture was offset by the environmental impact of ripping up ground to build more hotels. If large companies such as hotels don't have energy-efficient lighting, landscape systems and water flow systems, the impact of reusing towels cannot reach its full potential.
Westerveld wrote about greenwashing three years later, in 1986, and 36 years on, many hotels still encourage towel reuse by patrons with messages touting sustainability.
Andreas Rasche, professor of business in society at the Copenhagen Business School's Centre for Sustainability, says greenwashing is "an inconsistency between communication and actual practices."
It's not only hotels. Many online retailers allow shoppers to sift through products based on their sustainability claims. Dozens of health and beauty products, including shampoo bottles, makeup and snacks, that promise to be biodegradable, compostable, plant-based or made of recycled materials, are marketed in major retailers.
Many companies have promised to tackle climate change, including low-cost fashion brands such as Shein and Boohoo which offer "sustainable" clothing collections and appointed environmental leaders in their companies. But experts say these efforts alone do not necessarily make up for other environmental flaws.
The NewClimate Institute and Carbon Market Watch released a report in February detailing how successful 25 of the world's largest companies have been in their promises to reduce their emissions. Most of those companies, including Amazon, Google, IKEA and Walmart, earned low marks. While all of the companies have promised to reach some form of zero emission, net zero or carbon-neutrality target, just one — Maersk — was found to have "reasonable integrity" to hit its goal. No companies received a high integrity rating.
While marketing products as green or sustainable has become more widespread, Rasche told CBS News it's nothing new.
"It's been around for a long time, actually, because consumers have been responding to these social and environmental claims a lot. And when companies realize, 'Oh, they are responding, they're actually buying products because of green attributes,' they also feel pressured to make certain claims which are not aligned with what they actually are doing," he said.
But being able to tell what's real and what's just clever marketing has become increasingly difficult, with companies becoming "more sophisticated" in their marketing.
Here's what Rasche says consumers can do to tell the difference.
"You can use these words and there are very few legal definitions around it, depends a little bit on the country," he said. "... Using such vague words should kind of ring the alarm bells in the consumer's eyes."
It will take more work, but to better ensure you are making a truly eco-friendly investment, he said, you have to look for more independent labels that verify claims. Some companies, for example, say they are fair trade — a trade practice that essentially promises a more just and sustainable production and supply process — without having the actual certification. FairTradeCertified.org allows people to search for specific products to verify their certification, although just because items are Fair Trade Certified does not mean their companies are free of other environmental harms. Non-governmental organizations and unions also offer independent verification of labels, he said.
Some companies will also make claims that sound good, but are actually not exceptional. For example, some products today boast of being CFC-free, Rasche said, when in reality "it's the law."
"It is nothing special," he said.
Online databases, such as Ecolabel Index and the International Trade Centre's Standards Map, can help sort through what various labels mean and what companies have to do to use them.
This Earth Day, the world's leading experts and scientists are continuing to warn of the dangers ahead if humanity does not take control of the climate crisis. And while companies and global leaders have the leading reins on handling the situation, consumers have the power to force a change in direction.
"The problem is us, as human beings. So, if you want to solve the problem, it is up to us," Rasche said. "...There is a certain moral obligation to go towards these types of more sustainably-sourced products.
"For consumers, at the end of the day, it comes down to realizing if they want to change something, they need to use their own purchasing power," he said. "...It's definitely more sustainable than planting a tree."
Li Cohen is a social media producer and trending reporter for CBS News, focusing on social justice issues.
source: https://www.cbsnews.com/news/companies-say-theyre-going-green-sustainability-marketing-earth-day/