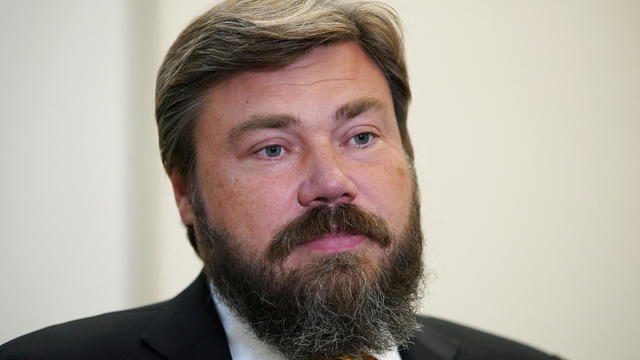 Washington — A Russian oligarch and media executive has been charged for violating U.S. sanctions in an alleged scheme that involved hiring an American citizen to both run a Russian cable news network and secretly transfer a $10 million investment out of the U.S., the Justice Department announced Wednesday.
Konstantin Malofeyev is accused of employing an American television producer, Jack Hanick, who was indicted last month on sanctions violations, to help create the Russian TV Network in 2013. Malofeyev allegedly paid Hanick through Russian entities until the end of 2018, according to investigators, and provided him with housing in Moscow. The Justice Department also alleged Malofeyev sent Hanick to Greece and Bulgaria between 2015 and 2016, in hopes of creating and then managing other television networks.
In 2014, Malofeyev was sanctioned by the U.S. for financing and promoting the separatist movement in Crimea. This designation both froze his assets and made it illegal for anyone to do business with him.
Following the sanctions, the indictment unsealed Wednesday alleged Malofeyev used Hanick as a middle man to transfer a $10 million investment in a Texas bank to the Greek Business Association by using a shell company.
Malofeyev is the first Russian oligarch charged with a sanctions violation by the Justice Department since the war in Ukraine began in late February. Malofeyev remains at large.
The Justice Department and FBI also announced that investigators toppled a two-tier botnet operation tied to the Russian government that had the potential to infect thousands of devices across the globe.
According to Wednesday's announcement, court-authorized investigators disabled a threat actor known as Sandworm, thereby preventing it from utilizing the malware "Cyclops Blink" on infected devices. The malware works by targeting network devices manufactured by WatchGuard Technologies Inc. and ASUSTek Computer Inc. and gains access to users' devices by implanting bots in security systems like firewalls typically used in home offices and small businesses.
The U.S. government has attributed the work of Sandworm to the Main Intelligence Directorate of the General Staff of the Armed Forces of the Russian Federation, also known as the GRU.
According to the FBI, the American operation removed the malware from internet-connected firewall devices and ultimately severed the connection between the bots and Sandworm.
Wednesday's announcement came just two days after the Justice Department announced it took control of the mega yacht Tango, which belongs to sanctioned Russian oligarch Viktor Vekselberg, after investigators obtained a warrant for the $90-million vessel's seizure.
"Our message to those who continue to enable the Russian regime from their criminal conduct is this: it does not matter how far you sail your yacht. It does not matter how well you conceal your assets. It does not matter how cleverly you write your malware or hide your online activities," Attorney General Merrick Garland said Wednesday, "The Justice Department will use every available tool to find you, disrupt your plots and hold you accountable."
Garland also told reporters that the Justice Department is working with the international community to assist in the collection of evidence in ongoing investigations into violent atrocities the Russian government is accused of committing in Ukraine.
"This Department has a long history of helping to hold accountable those who perpetrate war crimes," Garland said, adding later, "We're helping our European partners and our Ukrainian partners…to collect the information on the atrocities that we have all seen."
source: https://www.cbsnews.com/news/russian-oligarch-sanctions-violation-konstantin-malofeyev/