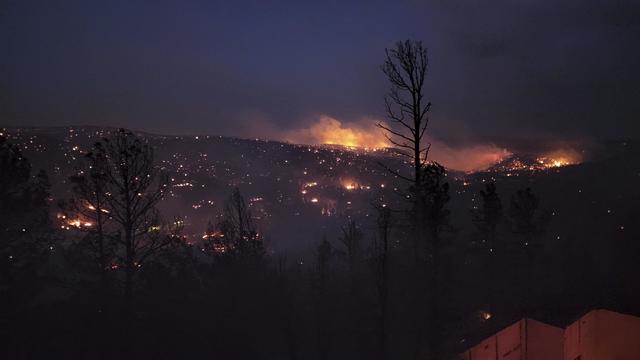 New Mexico faces a long and potentially devastating wildfire season, Gov. Michelle Lujan Grisham said Saturday, as Southwestern wildfires cause destruction and force people from their homes.
Hundreds of structures were lost in a growing number of wind-driven blazes across drought-stricken New Mexico, Lujan Grisham said Saturday.
Over 20 active wildfires were burning in at least 16 of the state's 33 counties, in the wake of winds that gusted up to 90 mph (145 kph) on Friday, Lujan said during a briefing streamed online. "So half the state has a fire issue."
With so many fires burning in April, well before the normal May or June start of the wildfire season, "our risk season is incredibly and dangerously early," Lujan Grisham said.
Wildfire has become a year-round threat in the West given changing conditions that include earlier snowmelt and rain coming later in the fall, scientist have said. The problems have been exacerbated by decades of fire suppression and poor management along with a more than 20-year megadrought that studies link to human-caused climate change.
New Mexico as of Saturday had the most major wildfires burning of any state, though neighboring Arizona also had large fires that included one that burned 30 homes near Flagstaff on Tuesday.
Sporadic snow and rain has had little effect dousing the Tunnel Fire, which has been burning for nearly a week. Some 21,000 acres have burned and the fire is was only 3% contained as of Saturday night.
Winds and temperatures in New Mexico diminished Saturday but remained strong enough to still fan fires, and dozens of evacuation orders remained in place.
Over 200 structures have burned, Lujan Grisham said, not providing specifics on locations or the numbers of homes included in that count.
With fires still burning and charred areas too dangerous to enter, "it's not safe for you or us to have a complete assessment to date," she said, indicating that the number of lost structures would rise.
She appealed to residents to refrain from using fireworks or burning trash and to evacuate when fire warnings are issued. "You need to leave. The risks are too great," she said.
The largest blazes were concentrated in northern New Mexico, where two major fires merged and numerous villages were threatened by advancing flames as residents heeded calls to leave.
Maggie Mulligan said Friday her dogs could sense the panic while she and her husband packed them up, agonized over having to leave horses behind and fled a fast-moving wildfire barreling toward their home.
"We don't know what's next," she said. "We don't know if we can go back to the horses."
Mulligan and her husband, Bill Gombas, 67, were among the anxious residents who hurriedly evacuated their homes Friday ahead of ominous wildfires fueled by tinder-dry conditions and ferocious winds.
The merged fires burned some structures but no figures were available, said fire information officer Mike Johnson. "They were able to save some structures and we know we lost other structures that we weren't able to defend."
Wind-blown clouds of dust and plumes of smoke obscured the skies near the fires, said Jesus Romero, assistant county manager for San Miguel County. "All the ugliness that spring in New Mexico brings — that's what they're dealing in."
An estimated 500 homes in San Miguel were in rural areas of Mora and San Miguel counties covered by evacuation orders or warning notices, Romero said.
Elsewhere in the region, the fire danger in the Denver area on Friday was the highest it had been in over a decade, according to the National Weather Service, because of unseasonable temperatures in the 80s combined with strong winds and very dry conditions.
Lena Atencio and her husband, whose family has lived in the nearby Rociada area for five generations, got out Friday as winds kicked up. She said most people were taking the threat seriously.
"As a community, as a whole, everybody is just pulling together to support each other and just take care of the things we need to now. And then at that point, it's in God's hands," she said as the wind howled miles away in the community of Las Vegas, New Mexico, where evacuees were gathering.
Areas ordered Saturday to evacuate because of another large fire still growing in northern New Mexico included Philmont Scout Ranch. Meanwhile, the nearby town of Cimarron remained on notice for possible evacuation, according to Colfax County officials.
The scout ranch, owned and operated by the Boy Scouts of America, attracts thousands of summer visitors, but officials said no scouts were on the property and staff were previously evacuated because of poor air quality.
The Flagstaff-area fire also burned numerous other buildings when the flames blew through rural neighborhoods Tuesday.
A shift in wind had crews working Saturday to keep the fire from moving up mountain slopes or toward homes in rural neighborhoods near areas that burned Tuesday, fire information officer Dick Fleishman said. "It has got us a little concerned."
source: https://www.cbsnews.com/news/wildfires-new-mexico-arizona-tunnel-fire/