The western Ukrainian city of Lviv, which has so far been largely unscathed by the war, has recorded its first civilian deaths after Russian strikes, officials say. 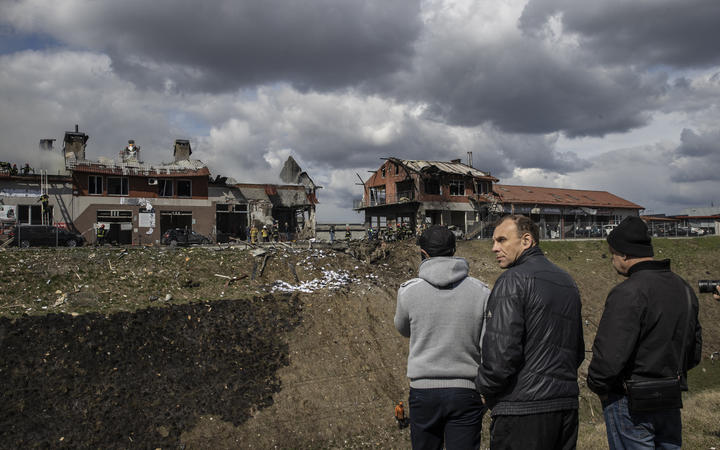 At least seven people were killed and 11 injured in the early morning attack on Monday, the city's mayor said, warning that the death toll could rise as emergency services clear through the rubble.

Lviv is the hub through which tens of thousands of people have fled to neighbouring Poland after withstanding weeks of strikes in cities such as Kyiv, Kharkiv and Mariupol.

But Mayor Andriy Sadovyi told reporters that the morning strikes showed there were now "no safe and unsafe locations" in Ukraine.

"Everyone is unsafe," he added.

Russia has said its plan is to focus its forces in the east - an attempt to capture the industrial area on the border known as the Donbas - after Ukraine held off its attempt to take the capital Kyiv, in the north.

This is why the strikes in Lviv - which is hundreds of miles from the front line in the east - came as a surprise and left many residents in shock.

Officials said the missiles struck three warehouses and a car garage, where a group of colleagues had gathered for a coffee before work.

Yury Baran - who worked in IT at the garage - was among them.

Later, his parents Anatoly and Maria arrived at the site of the attack which is now surrounded by ruined cars and debris. They hadn't been able to get through to their son, who was less than a month shy of his 27th birthday.

Now, those helping sift through the rubble told them the worst news: he had died in the attack.

"Humans cannot do such things. They are not humans, they are barbaric invaders," Anatoly said of the Russians.

Valya has lived in a building close to the site since she was born. The 70-year-old heard the sirens shortly before 08:00 local time but ignored them - she assumed she would be safe.

The explosion knocked her to the ground. "I was so scared," she told us. "Everything was shaking, all the glass shattered."

Still wearing her pyjamas, she wandered into the street in a daze until a neighbour yelled at her to head to the basement.

"My heart was pounding," she said. "I'm lucky this was just the [shockwave] and not a rocket."

Upstairs in the same block, Olena said she had taken her dog Valdo to the kitchen for cover after hearing the blast.

"The explosion was so loud I thought it hit my house," she said. "I'm lucky."

Speaking to the BBC after the attacks, Sadovyi said people in his city would now take air raid sirens more seriously. While the Russians have previously struck the Lviv region, and wounded five in an attack in March, these are the first civilian deaths confirmed in the city proper.

"I think after today Lviv residents will not question, should I go to the basement or not?" he said.

Tatiana was at a bus stop when the Russians struck. Like others, she couldn't believe the city was under attack - initially she thought it must have been a gas explosion.

She described the attacks as "inhuman", saying national leaders make decisions and ordinary people "die for nothing".

The strikes shattered a sense of security in the west of the country. Sunday was the first day that the numbers crossing from Poland exceeded those leaving Ukraine since the war began, while some refugees we spoke to are now heading home after initially fleeing the east of the country.

The city itself has become a haven for fleeing civilians, humanitarian groups, foreign diplomats and journalists. Officials recently extended a curfew until 23:00 local time and city centre bars and churches were bustling over the weekend.

Myroslava, walking past the blast site as firefighters tackled the billowing, black smoke pouring from a roof top, told us she heard the explosion from 1.5km away and echoed the thoughts of all those caught up in Russia's invasion.

"We're anxious, we're empty inside - why us?" she said, wide eyed and raising her hands in despair. "We don't understand what it's all for."