Zelenskyy says situation in Borodyanka is much worse than in Bucha 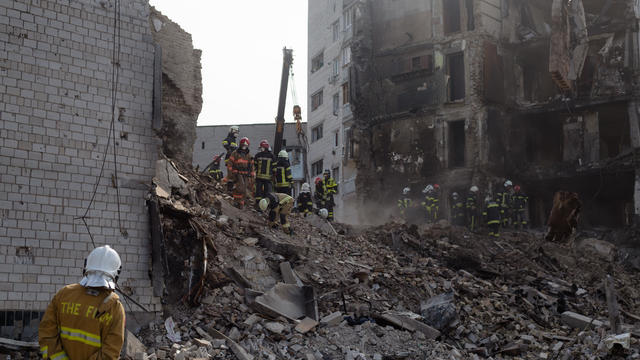 Following outrage over horrific images of civilians killed in the city of Bucha, Ukrainian President Volodymyr Zelenskyy said the situation in neighboring Borodyanka is even worse. Investigators say they found 26 bodies amongst the rubble in Borodyanka on Thursday.
Vadim Shandrenko is among those looking for the remains of friends and family. His friend, Volodymyr, was at home inside a now collapsed apartment building when it was hit by Russian airstrikes. Shandrenko told CBS News the Russian soldiers wouldn't let him search.
Locals told CBS News the Russians also blew up a bridge as they retreated from the city.
In the nearby village of Termakhivka, locals told CBS News that Russian soldiers looted everything from clothing and silverware to refrigerators and washing machines.
Mykola Oleksienko, the head of the village, said the Russians raided the village's clinic, leaving it wrecked.
Termakhivka is about 30 miles from the Chernobyl nuclear site, where Russian troops have also pulled out. Ukraine says the Russians dug trenches in one of the most contaminated parts of the exclusion zone, exposing themselves to significant doses of radiation.
A Kremlin spokesman admitted Thursday that Russia has lost a significant number of troops in Ukraine, calling it a "huge tragedy," but did not say how many had been killed.
source: https://www.cbsnews.com/news/ukraine-zelenskyy-borodyanka-bucha/