By Uditha Jayasinghe and Devjyot Ghoshal of Reuters

Sri Lanka's embattled president announced 17 new ministerial appointments on Monday, notably leaving out members of his own family, and expressed regret for his government's handling of a devastating economic crisis that has led to widespread protests. 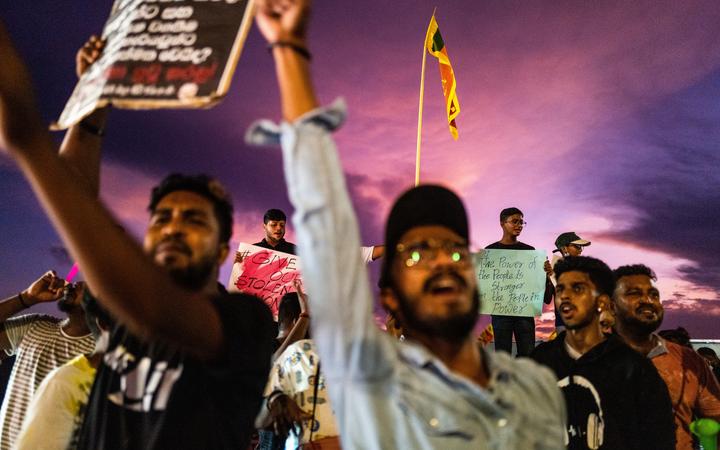 An anti-government demonstration near the president's office in Colombo on April 17, 2022, demanding President Gotabaya Rajapaksa's resignation over the country's crippling economic crisis. Photo: AFP or licensors

President Gotabaya Rajapaksa and his elder brother, Prime Minister Mahinda Rajapaksa, will stay on despite demands from protesters and the opposition for them to quit. Rajapaksa has governed the South Asian island nation since 2019 with other family members in top government positions.

The island nation of 22 million is experiencing prolonged power cuts and fuel and medicines shortages triggered by a tumble in its foreign exchange reserves that has stalled imports of essentials, leading to daily protests in the commercial capital Colombo.

The government is set to begin talks with the International Monetary Fund (IMF) on Monday for a loan programme, and analysts have flagged political instability as a risk to Sri Lanka finding a way out of its financial turmoil.

In a speech to his new cabinet, President Rajapaksa said the country should have sought help from the IMF sooner - as urged by opposition parties and experts.

"I believe that we should have gone for a programme with the International Monetary Fund earlier," he said, according to a statement issued by his office.

"Today, people are under an immense pressure due to this economic crisis. I deeply regret... this situation.," the president said.

"The pain, discomfort and anger displayed by the people for having to spend time in queues to get essential items at a high price...is justified."

Thousands of Sri Lankans have been protesting outside the president's office in Colombo for over a week, demanding that the Rajapaksas resign.

Faced with growing popular unrest Rajapaksa dissolved his previous cabinet earlier this month and invited all parties in parliament to form a unity government, but opposition groups and members of the ruling alliance rejected the idea.

On Monday only five members of the previous cabinet were sworn in again, while most other portfolios were allocated to members of the ruling Sri Lanka Podujana Peramuna party.

Among those not re-appointed from the previous cabinet were two more of the president's brothers, Basil and Chamal, and the prime minister's son Namal.

The president said he would seek solutions to Sri Lanka's problems, including via possible constitutional changes.

"I am ready to extend my full support to Parliament at any time in this regard," he said.

He also said that a decision last year to ban all chemical fertilisers, which was later reversed but led to a drop in agricultural production, was a mistake.

"I think the decision not to provide chemical fertilizers to farmers was an error. We have taken steps to revive that practice," he said.

Economic mismanagement by successive governments weakened Sri Lanka's public finances, but the situation was exacerbated by deep tax cuts enacted by the Rajapaksa administration soon after it took office in 2019.

Key sectors of the economy, particularly tourism, were then battered by the Covid-19 pandemic, while the government dragged its feet on approaching the IMF for help.