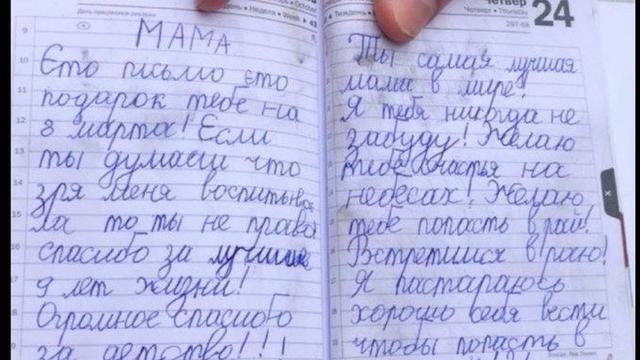 A letter written by a little girl reveals the heartbreaking toll of the war in Ukraine. Nine-year-old Galia penned the note inside what appears to be a day planner to her mother, who died in Borodyanka.
A photo of the note was shared on Twitter by Anton Gerashchenko, adviser to Ukraine's minister of internal affairs. Galia wrote the letter on March 8, less than two weeks after Russian President Vladimir Putin launched the deadly attack.
"Mum, this letter is your present," she wrote. "...If you think that you nurtured me for no reason, you are not right. Thank you for the 9 years of my life. Thank you so much for my childhood. You are the best mother in the world! I will never forget you! I wish you happiness in heaven. I wish you to go to heaven. We will meet in heaven. I will try to behave myself to go to heaven. Kissing you."
Here's the letter from 9-old girl to her mom who died in #Borodianka.
"Mom!
You're the best mom in the whole world. I'll never forget you. I wish you'll get in Heaven and be happy there. I'll do my best to be a good person and get in Heaven too. See you in Heaven!
Galia xx". pic.twitter.com/07l7vfQxM4
Gerashchenko said that the little girl's mother died in Borodyanka, a Ukrainian city that has been facing horrific conditions since Russian troops invaded. Ukrainian President Volodymyr Zelenskyy said last week that the situation there is even worse than those in its neighboring city of Bucha, where horrific images have surfaced of slaughtered civilians.
Last Thursday, investigators found 26 bodies among rubble in Borodyanka. Ukrainian troops were able to recently regain control over the city from Russian troops, according to Reuters. As of Monday, local rescuers were still attempting to find missing residents.
On Wednesday, Zelenskyy said that "tens of thousands of people have already been killed" in Ukraine.
"Russian army uses all types of artillery, all types of missiles, aerial bombs, including phosphorus bombs and other ammunition banned by the international law," he said in a video address. "This is an obvious terror of the civilians. This is an attempt to break the people's spirit, to conquer Ukrainians for decades or simply destroy them."
Li Cohen is a social media producer and trending reporter for CBS News, focusing on social justice issues.
source: https://www.cbsnews.com/news/ukraine-girl-letter-to-mom-who-died-war/