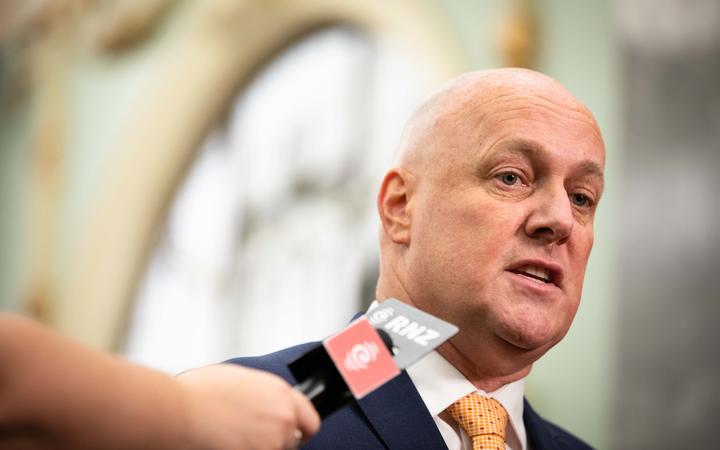 Another high quarterly inflation figure - expected to be near the 7 percent mark - is to be released tomorrow.

Luxon said the government has been blaming international factors for adversely affecting inflation but Singapore is at 2 percent, Australia is at 3.5 and Japan is at 1 percent while dealing with the same challenges.

With New Zealand at 6 percent heading to 7, the government needs to be focused on reviewing spending, he told Morning Report.

"We don't need cuts to spending and public services but we do need to make sure that any wasteful spending or any incremental new spending, we're getting a return from it and we haven't been doing it."

Asked if National would cut a $6 billion allowance the government is poised to spend, Luxon said the government has increased spending by 68 percent since it came to power.

The OECD warned months ago that the country needs to rein in its spending.

Acting Prime Minister Grant Robertson announced yesterday that the government will be setting new fiscal rules after its previous self-imposed rules were suspended due to the Covid-19 pandemic.

He said it is important to ensure that not only is debt kept under control but that infrastructure is invested in.

Luxon said all ministers should be going through their budgets to prioritise good public services but to see where any wasteful spending could be cut.

"I can tell you [National's Finance spokesperson] Nicola Willis would do it. She would have all those ministers going through line by line, saying actually what programmes aren't working, where is that wasted money happening."

Asked if he would look at delaying the party's plans to cut taxes, he said he would not - that the $1600 that the average household would receive annually would be helpful.

Opening up immigration settings to help businesses get critical workers into the country would also be useful, he said.

Matariki might be a great idea but it will cost the country $450 million so another holiday such as Labour Day should be cancelled.

"How do you throw $450 million of extra cost on business at a time when you're dealing with cost of living and inflation the highest it's been in 30 years and higher than any of our trading partners.

"New Zealand is not doing a good job of managing inflation domestically at the moment because the government is into spending. It's just spend spend spend."

The Reserve Bank should be 100 percent focused on price stability and other secondary mandates should be removed.

Regarding food prices and the ownership of supermarkets, Luxon wants the Commerce Commission's recommendations to be enacted.

Land should be freed up for more supermarkets, there should be a code of conduct "with real teeth" and an Ombudsman with real powers, he said.

Robertson said he has to balance the low level of debt New Zealand had coming into the Covid-19 pandemic "against the fact that New Zealand has a massive infrastructure deficit".

The government needs to completely rebuild the health system. At the same time, the big drivers of cost of living pressures are being generated offshore as well as build state houses to help ease the housing crisis.

"In particular the Covid-19 pandemic and the pressure that's put on supply chains, we've got the war in Ukraine now that is putting further pressure on that. And so while we have to be careful with our spending ... it is important that we don't cut our nose off to spite our face and take away funding that's really important in areas like health or housing."