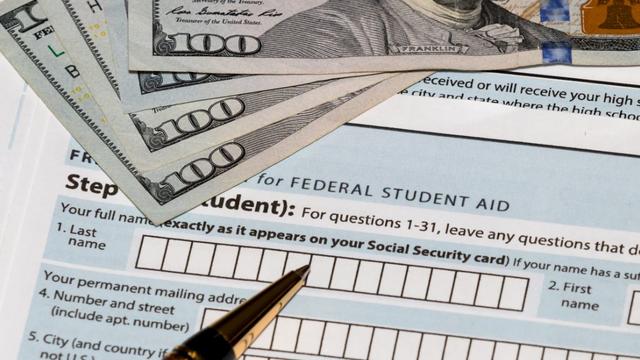 The Education Department announced fixes on Tuesday to multiple student loan programs, giving thousands of borrowers immediate relief from student loan debt and bringing millions more years closer to having their student loans forgiven. It comes as the Biden administration continues to examine canceling student loan debt for millions of Americans.
The changes are being made to the Public Service Loan Forgiveness programs and the Income-Driven Repayment plans. According to the Education Department, the fixes will give 40,000 borrowers immediate forgiveness and bring at least 3.6 million borrowers closer to relief by at least three years through income-driven repayments.
"Student loans were never meant to be a life sentence, but it's certainly felt that way for borrowers locked out of debt relief they're eligible for," said Education Secretary Miguel Cardona in a statement. He said the move begins to "remedy years of administrative failures" and the actions demonstrate the administration's commitment to delivering "meaningful debt relief and ensuring federal student loan programs are administered fairly and effectively."
A Federal Student Aid office review found some servicers had been placing borrowers facing financial difficulties into forbearance in violation of regulations requiring borrowers get clear, accurate information about their options to stay out of delinquency. This happened even when monthly payments under income-driven repayment plans could have made their payments as low as zero dollars, the Education Department said.
To address the issue, the Education Department will conduct a one-time account adjustment to count certain long-term forbearances toward income-driven and public service related forgiveness. The changes will be automatically applied to borrowers accounts later this year. Borrowers that were steered into shorter-term forbearances will also be able to seek account reviews. At the same time, the administration will increase oversight of servicers' abilities to enroll borrowers in forbearance including working with the Consumer Financial Protection Bureau to do regular audits of forbearance use.
Meanwhile, in its review of the income-driven repayment program, the Education Department found "significant flaws" suggesting borrowers were missing out on making progress toward forgiveness. The Federal Student Aid office will conduct a one-time revision of the income driven payments so any month a borrower made payments will count toward forgiveness, no matter which repayment plan they're in. That includes payments made prior to loan consolidation. For those who have made the required number of payments — typically 120 — loans will automatically be canceled.
In an effort to permanently fix the problem, the Education Department will be issuing new guidance for servicers. Starting next year, borrowers will be able to log into their accounts through the Federal Student Aid office to view their own progress toward income-driven repayment forgiveness online. In addition, the Education Department plans to take steps to further simplify payment counting by allowing more loan statuses to count toward income-driven forgiveness.
The efforts announced Tuesday come as the Biden administration has already canceled more than $17 billion in debt for some 725,000 borrowers since President Biden took office.
Earlier this month, the White House also announced an extension of the federal student loan payment pause through August 31. White House press secretary Jen Psaki recently said the administration would make a decision between now and then on canceling student loan debt, or the pause would be further extended.
CBS News reporter covering economic policy.
source: https://www.cbsnews.com/news/student-loan-program-changes-biden-administration-debt-education-department/