New Zealand's referees boss Bryce Lawrence believes the rash of red cards in the seventh round of Super Rugby Pacific was a "one-off" and the average over the season is likely to be no higher than in previous years. 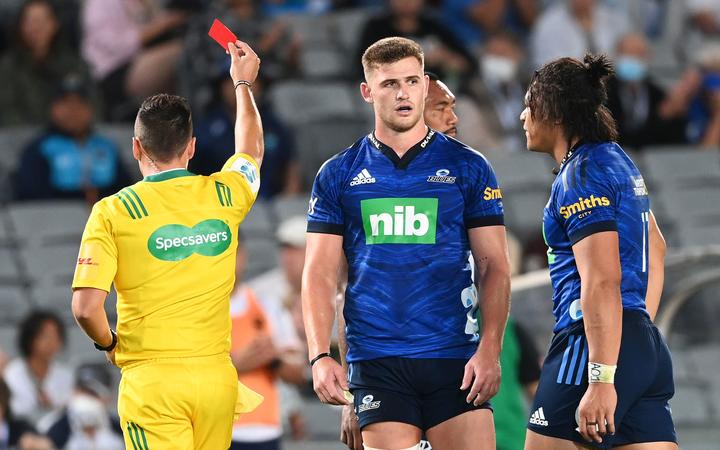 A player was sent off in five of the competition's six matches last week, all for making contact with an opponents' head during a tackle, collision or clear-out at the ruck.

Three of those came in games involving New Zealand-based teams, with All Black duo Nepo Laulala and Caleb Clarke from the Blues and Crusaders hooker Shilo Klein all shown red cards.

"There's no difference to last year," Lawrence said on Wednesday.

"In Australia and New Zealand, we ended up with about one red card in every five games. The stats are the same this year, if not a little lower. Last week, it was a bit of a one-off ..."

World Rugby has been on a mission to remove head contact from the game over the last few years because of the potential for concussion, which can have a long-term impact on player health.

Chief executive Alan Gilpin said on a visit to Australia on Monday the increase in the number of red cards was an attempt to "drive different behaviours".

"Those cards are being issued because the match officials, as we are asking them, are protecting the players," he told reporters in Sydney.

"We have gone out with a strong message in terms of sanction around head injury and head impacts in particular. Over time, I think we will see the players and coaches will adapt to that and come out on the right side."

Concerns that one team being a player down can end the match as a contest have led to Super Rugby trialling a law variation where the dismissed player can be replaced after 20 minutes.

Lawrence said the fact that four of the five teams who lost a player to a red card last weekend had gone on to win the match proved that it was having the desired effect.

"It doesn't kill the contest," he said. "Our current view is that it's a real positive for the game and for the people paying to watch.

"In New Zealand and Australia, we're very positive about trialling this because we know the teams want to play with 15. The fans want to watch 15 on 15."