Why the Masters' green jacket is the holy grail of golf 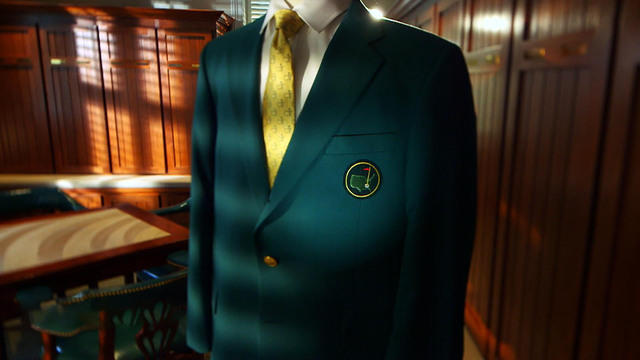 Hockey has the Stanley Cup, football has the Vince Lombardi Trophy and golf has the most coveted piece of green fabric.
The world's top golfers travel to Augusta National Golf Club each year to compete for the Masters' green jacket.
The first Masters champion awarded with a green jacket was Sam Snead in 1949, and it has been worn by some of the greatest golfers since, including Arnold Palmer, Jack Nicklaus and Tiger Woods.
For the past 37 years, CBS Sports' Jim Nantz has been presiding over the green jacket ceremony. He told CBS News' Dana Jacobson that the ceremony represents a moment in golf's history.
"Well it's what it symbolizes. I think most would say it represents the greatest victory in golf. It represents history, tradition, heritage. It just connects the generations of champions. I mean, I would say it's the richest reward in golf. It's not about the money, it's about the green jacket," Nantz said.
Nick Faldo, who won the Masters in 1989, 1990 and 1996, said that even the strongest of men get overwhelmed with emotions when the green jacket is bestowed upon them.
"You come in and you're in a fog. You just won the Masters for crying out loud," said Faldo.
The green, three-button, single-breasted, center-vested blazer is made of worsted wool and comes with a logo of Augusta National Golf Club sewn onto the left breast pocket.
Each Masters winner gets only one jacket, no matter how many times they win.
The jackets are kept on club grounds and cannot be removed, with one exception: The reigning Masters champion can take the jacket home until the next year's tournament.
Ceremony protocol dictates that the previous year's champion helps the new winner put the jacket on. For some like Faldo that served as inspiration in back-to-back Masters' victories.
"I used that as motivation. I honestly went down, and I thought, 'I'm not going to put that jacket on him. It's my jacket," Faldo said. "Yeah, for a split second I thought, 'No it's mine, I'm not giving it away."
source: https://www.cbsnews.com/news/masters-green-jacket-history/