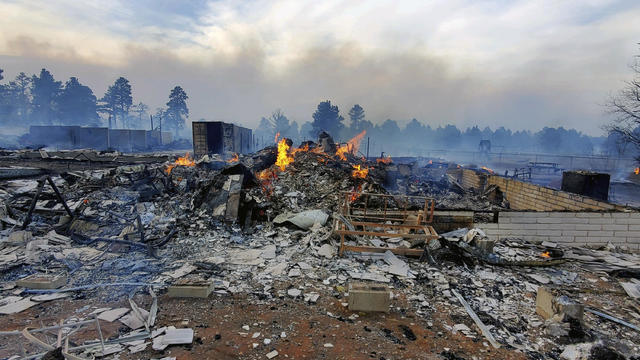 Flagstaff, Ariz. — Lisa Wells looked out the window of her home office and saw a plume of smoke. Before long, the smoke blackened, the wind intensified and entire trees were consumed by flames.
In what felt like seconds, her family moved Tuesday from a get-ready-to-go status to go-now. She managed to gather important medication and move their horses, alpacas and dogs to safety.
The home they bought 15 years ago on the outskirts of Flagstaff didn't survive. Fierce winds picked up embers that hopscotched across neighborhoods, destroying some homes and leaving others unscathed.
"It was a miracle that people got out because we had so little time," Wells said Wednesday, standing in a parking lot that has become a gathering spot for the evacuated communities.
Residents haven't been able to fully survey the damage, partly because the forecast has even stronger winds in store that experts say could lead to more explosive fire growth. It was 0% contained as of Wednesday night.
CBS Phoenix affiliate KPHO-TV reports the so-called Tunnel Fire's flames could be fanned Thursday and Friday by gusts up to 50 mph in most of northern Arizona.
About 25 structures have been lost in the blaze. Coconino County officials late Wednesday pointed residents to a system where they could seek help with food, temporary housing and other needs. Some 765 homes were evacuated.
And the risk isn't limited to Arizona. The 30 square-mile blaze outside Flagstaff is one of a half-dozen major wildfires that have raced across Arizona and New Mexico the last few days.
State and federal officials were scrambling to get more crews on the front lines before the wind forecast worsens Friday - gusting up to 70 mph in some parts of northern New Mexico.
At a community meeting in Flagstaff on Wednesday evening, Brian Klimowski of the National Weather Service declared the start of the fire season and said "it's going to be a long one this year."
Hundreds of people have been evacuated because of wildfires burning in New Mexico, Arizona and Colorado. Popular lakes and national monuments have been closed - some because fire has moved directly over them.
U.S. 89, the main route between Flagstaff and far northern Arizona, and communities on the Navajo Nation, remained closed.
Resources to fight the wildfires are tight. Four of the 16 top-level national fire management teams are dedicated to the Southwest - something fire information officer Dick Fleishman said is rare for April.
In Flagstaff, erratic winds have grounded air resources.
Residents around Flagstaff questioned how a small blaze reported northeast of the college town Sunday afternoon ballooned to more than 30 square miles by Wednesday afternoon. Matt McGrath, a district ranger on the Coconino National Forest, said firefighters had corralled the wildfire Sunday and didn't see any smoke or active flames when they checked on it again Monday.
By Tuesday, the wind was firmly in control. Flames emerged and jumped the containment line, leaving firefighters and McGrath to ask themselves if they could have done something differently, he said.
"I can't tell you for sure, but I don't think so," McGrath said. "And I know that's not a satisfying answer when people are going through what they're going through right now."
The cause of the fire is under investigation.
Another big fire southeast of Taos, New Mexico, also has burned more than 30 square miles, but it's in a rural area where no structures have been destroyed and a small number of evacuations ordered.
In Colorado, new wildfires prompted evacuations in Monte Vista, a city of about 4,150 people in the southern part of the state, and near Longmont. An undetermined number of structures burned but no one was injured, authorities said.
"We struggled at times to stay in front of this fire and stay out of the way of it because the winds and stuff were so strong," said Monte Vista Police Chief George Dingfelder.
The number of acres burned in the U.S. so far this year is about 30% above the 10-year average, according to the National Interagency Fire Center. Above-average temperatures and below-average precipitation have combined with spring winds to elevate the chances for more catastrophic fires.
Rocky Opliger, the incident commander on a wildfire that has burned about 3 square miles and forced evacuations south of Prescott, Arizona, said the conditions are some of the worst he's seen in nearly five decades of fighting wildland fires.
"This is very early to have this kind of fire behavior," he said. "Right now we are on the whims of weather."
source: https://www.cbsnews.com/news/arizona-tunnel-fire-flagstaff-strong-winds-explosive-growth/