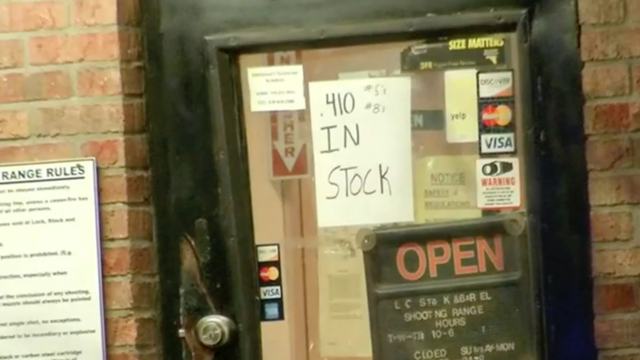 Police are searching for at least one armed suspect after the owner of a Georgia gun range, his wife and his grandson were killed, authorities said Saturday.
The Grantville Police Department said via Facebook that the alleged robbery and shooting occurred Friday evening. When officers arrived at the scene around 8 p.m., they discovered that the owner of Lock Stock & Barrel Shooting Range, Thomas Richard Hawk Sr., 75, had been killed. His 75-year-old wife, Evelyn, and their 17-year-old grandson, Luke, were also found dead.
Police Chief Steve Whitlock told WSB-TV on Saturday that this robbery has hit him like nothing else has in his 40 years in law enforcement.
"I've been here eight years and we've never had anything like this," Whitlock said. "Right now, I'm just speechless. I have a hard time talking about it because they were friends of ours. I've known them for a long time."
Whitlock said investigators believe the robbery and shooting happened around 5:30 p.m. Friday, which is when the range normally closes. He said Hawk's son, Richard, came by the business around 8 p.m. and was the person who found the victims.
The Hawks had operated Lock, Stock & Barrel and been a part of the small, tight-knit community for nearly 30 years. Their grandson was on spring break, helping his grandparents at the shop, authorities said.
"It's really hard because we don't have stuff like this here in Grantville," Whitlock said. "This is a nice, quiet little town."
The police chief said the incident is personal.
"We stopped by here at least once or twice a week," Whitlock said. "I was here Tuesday talking to them and the assistant chief was here on Wednesday talking to them."
Investigators said that as many as 40 guns and the range's surveillance camera and recorder were taken from the scene.
The Georgia Bureau of Investigation is investigating, but when contacted Saturday referred all inquiries to Grantville Police. The Bureau of Alcohol, Tobacco, Firearms and Explosives was also called in due to the amount of weapons taken. The three agencies are trying to piece together what may have led up to the shooting and to find leads on a potential suspect or suspects.
A reward of $15,000 has been posted for information leading to the arrest and conviction of the killer or killers in the case, according to the ATF Atlanta office's Twitter feed.
"ATF and our law enforcement partners will work tirelessly to bring the killer(s) to justice," ATF Atlanta Field Division Special Agent in Charge Benjamin P. Gibbons said in a statement. "The brutality of these senseless murders along with the fact that these killer(s) have acquired additional firearms makes solving this case our top priority."
Police are looking for witnesses and have not announced any arrests. Whitlock said they don't have any video evidence to work with right now.
The shooting range is in rural Coweta County, about 50 miles southeast of Atlanta.
source: https://www.cbsnews.com/news/shooting-georgia-gun-range-three-people-dead/