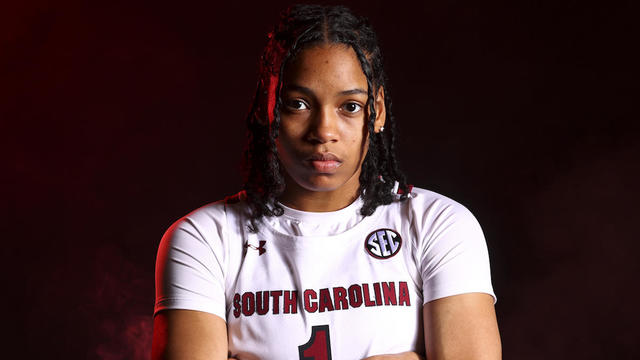 College basketball made headlines last month for a reason beyond the NCAA March Madness tournament when Opendorse released new data showing that women basketball players are the second highest paid college athletes. Zia Cooke — a junior guard and leading scorer for the University of South Carolina's women's basketball team, which won the tournament in March — was named one of the highest paid college basketball players in the Final Four, according to Bloomberg.
"It just shows that we can do a lot of things that a lot of people say we can't do," she told CBS News. "To see all the girls on there for the NIL and I think it was just one boy it shows that we can do literally everything they can do. It's a business and it's super effective for women and men."
Opendorse, which is based in Lincoln, Nebraska, tracks what sports agents call name, image and likeness, or NIL, deals, and found college football players are paid the most, while men's basketball players fall in a close third behind their female counterparts.
This comes after the U.S. Supreme Court ruled last year college athletes should be allowed to control their name, image and likeness, and make money off it. Now, you can catch your favorite college athletes sporting Puma gear, holding a Doordash bag with their personal discount code or even starring in a commercial.
Women basketball players have been able to cash in more than their male counterparts, due in part to their higher social media followings.
"I feel like a lot of people actually do love women's basketball. It's just hard for them to admit it, which I don't know why," Cooke said. "But I think that the paper shows it all, the stats. The stats show it all."
Cooke has over 228,000 followers on Instagram. And if you want this young star to shout out your product, her posts are valued at a potential $8,000 each, Bloomberg reported. She's the top potential earner on her team, and one of the top potential earners in collegiate basketball.
The point guard recently partnered with H&R Block in her biggest deal to date, and said working with the company was "super, super fun."
"It gave me a chance to show who I am for one minute," she said. "I've done DoorDash, which was also super fun. I did Bojangles deals and I've done Fenty Skin, Rihanna's line, so I have quite a bit and it's just the beginning. I'm excited for what else is in store."
What does a young 21-year-old do with so much money? For Cooke, she doesn't even look at her account.
"I really don't even want to know how much money I have," she said. "I haven't looked at the account since I've started. Now I'm just trying to stay focused on my best work….I want to save because once you see the prices, like you want to buy stuff like that."
source: https://www.cbsnews.com/news/zia-cooke-university-of-south-carolina-womens-basketball-sponsorship-deals/