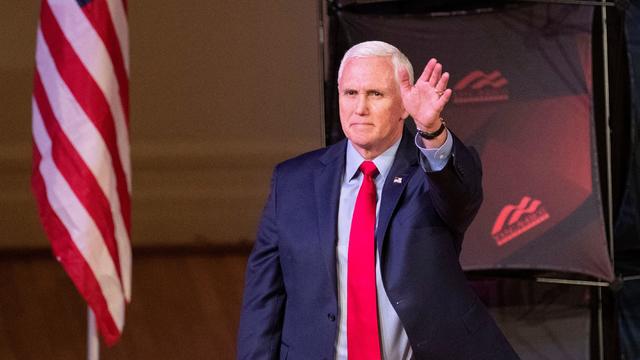 On Tuesday evening, former Vice President Mike Pence praised Ukrainian President Vladimir Zelenskyy, criticized President Biden and "cancel culture" and said he would tell his child, "I love you" if his son or daughter came out as gay.
His remarks at the University of Virginia, in Charlottesville, more than four years removed from a violent white nationalist rally in 2017, revealed a political figure trying to at once embrace and set himself apart from former President Donald Trump, as he begins to chart a course for his own potential presidential bid in 2024.
While his visit was centered around free speech and was billed as "How to Save America from the Woke Left," he also advocated supporting the Ukrainian people and called Russia's invasion an "unconscionable war of aggression."
He encouraged attendees to contribute to humanitarian efforts in and around Ukraine, while praising Zelenskyy, whose refusal to surrender to Russia has won bipartisan admiration, with the exception of Republican North Carolina Congressman Madison Cawthorn, who previously called Zelenskyy "corrupt" and a "thug."
"Putin only understands strength and America must meet this moment with American strength," Pence said, adding that he wants more military aid sent to Ukraine and economic sanctions on Russia and President Vladimir Putin. During the Trump administration, it fell to Pence to inform Zelenskyy that hundreds of millions in aid would be withheld because Ukraine was falling short on fighting corruption, the Washington Post noted.
Pence embraced the Trump agenda as he touted its accomplishments, and he compared Trump to Republican icon Ronald Reagan by saying both challenged the political establishment.
"Under the Trump-Pence administration, we actually achieved things that conservatives had only talked about for generations," he said. "We did it all by standing strong for freedom."
Pence's speech with the Young Americans for Freedom Foundation in Virginia is part of a series of college visits he's taken in recent months. He's also been active with congressional and state races in 2022 through endorsements and ad buys for targeted districts.
"Politically, his focus is on the midterms and making sure we win back both chambers of Congress and more governors' mansions," former Pence chief of staff Marc Short told CBS News when asked if Pence's visit is the prelude to a 2024 presidential campaign. "This is not part of a presidential run."
He added that Pence would be traveling a lot this summer, for House races primarily, but he would stay out of GOP primaries. Trump, in contrast, has made a number of endorsements in the Republican primaries, even those involving GOP incumbents.
Short says he doesn't think Pence will be subpoenaed by the House select committee investigating the Jan. 6 attacks on the Capitol. Short, who was subpoenaed and testified before the committee, said it would be "incredibly unprecedented for a vice president to be called in front of a separate branch of government to talk about private conversations with the president."
Pence has defended his decision to follow the U.S. Constitution by certifying the Electoral College vote on January 6, 2021 — over Trump's public and private objections, in hopes that Pence would help overthrow the election and keep Trump in power, despite his loss to Mr. Biden. Pence has said he doesn't know if he and Trump will "ever see eye-to-eye" about what transpired that day.
Before Pence's remarks, there were protest plans and an editorial by the college newspaper, The Cavalier Daily, that criticized the university's invitation to Pence and said his appearance would spread "hateful rhetoric" towards marginalized communities.
"It's a university, I'd almost be disappointed if we don't have hecklers," said Larry Sabato, director of the University of Virginia's Center for Politics. "A large majority of students, faculty and staff, they want to hear both sides. They know where they stand– if this were Trump it'd be something totally different."
But only a small number of protesters remained outside by the time Pence began speaking, and he addressed the criticism of the event by framing it as a battle between cancel culture and free speech.
"I heard there was a little bit of controversy preceding my visit," Pence said. "The antidote to cancel culture is freedom. The antidote to woke America is freedom… the truth is, every one of you must be prepared to stand on the ramparts of freedom in your life."
Pence also spent time attacking Biden's handling of the economy and immigration, the rise of inflation, and what he called the Biden administration's "assault on culture."
During a question-and-answer portion with students, Pence, who has opposed gay marriage, was asked what he would say if his son or daughter were gay.
"I would look them in the eye and tell them, 'I love you,' he said, to cheers in the audience. He then referenced the Supreme Court decision that legalized same sex marriage, and said while he still believes in "traditional" marriage between a man and woman, "the way we come together as a country united, I believe is when we respect your right to believe, and my right to believe what we believe."
Asked by a student if he would run for president in 2024, Pence responded, "I'll keep you posted."
Aaron Navarro is an associate producer for the political unit at CBS News, focusing on House and gubernatorial campaigns as well as the census and redistricting.
source: https://www.cbsnews.com/news/mike-pence-zelenskyy-cancel-culture/