Russia says "another phase" of its Ukraine invasion has begun 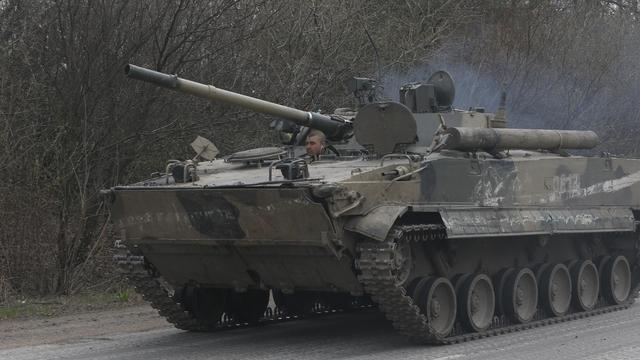 "Another phase" of Russia's invasion of Ukraine "is starting now," Russia's foreign minister Sergei Lavrov said in a television interview seen in India on Tuesday, stressing that Russia's goal is the "full liberation of the Donetsk and Luhansk republics." His comments came hours after Ukraine's president Volodymyr Zelenskyy said Russia's offensive in the east of the country had started.
"The Russian troops have begun the battle for the Donbas," Zelenskyy said in a video address late Monday. A "significant part of the entire Russian army is now concentrated on this offensive."
The eastern Donbas region of Ukraine is mostly Russian-speaking. Moscow-backed separatists have been fighting Ukrainian forces there for the past eight years and have declared two independent republics that have been recognized by Russia.
In recent weeks, after its attempt to storm Kyiv failed, the Kremlin declared that its main goal of the war was to capture the Donbas region. After withdrawing from the capital, Russia began regrouping and reinforcing its ground troops in the east for an all-out offensive.
"No matter how many Russian troops are driven there, we will fight," Zelenskyy said. "We will defend ourselves. We will do it every day."
Moscow said it struck 1,200 targets in Ukraine overnight and told the last Ukrainian forces defending Mariupol's giant Azovstal steel mill that if they surrendered before noon, they would "keep their lives."
Ukrainian troops who have defended the city for seven weeks have ignored previous, similar offers. The Azovstal plant, which covers the territory of about 4 square miles, is the last major Ukrainian pocket of resistance in Mariupol. Mariupol is a strategic port on the Sea of Azov. Its capture is important for Russia because it stands in the way of a land bridge to Crimea.
Earlier Tuesday, Eduard Basurin, a spokesman for the Russia-backed separatists in the Donbas region, said assault groups had moved into Azovstal in a bid to uproot the Ukrainian troops there, following bombing and an artillery barrage.
Meanwhile, the Reuters news agency reported that the governor of the eastern Luhansk region said Russian troops had captured the city of Kreminna. If true, Kreminna would appear to be the first city captured in the new Russian offensive.
"Kreminna is under the control of the 'Orcs' (Russians). They have entered the city. Our defenders had to withdraw. They have entrenched themselves in new positions and continue to fight the Russian army," Serhiy Gaidai said in a briefing, according to Reuters.
source: https://www.cbsnews.com/news/russia-ukraine-war-another-phase-invasion/